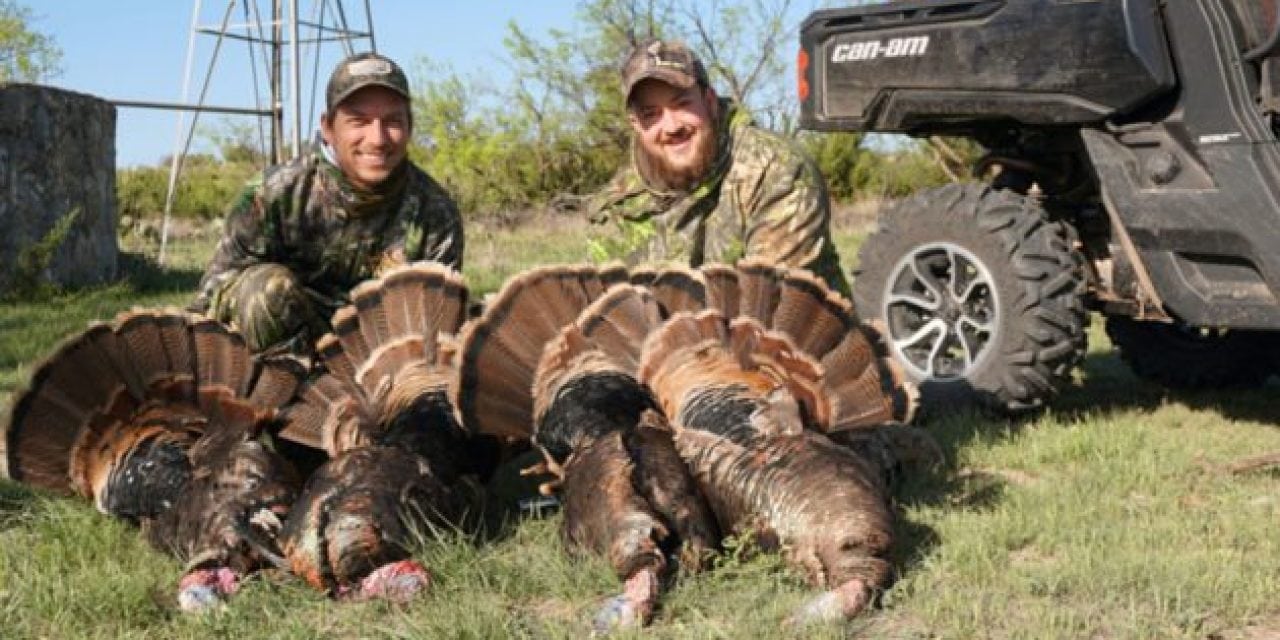 
The Wide Open Spaces team was fortunate enough to receive an exclusive invite to hunt for Rio Grande turkeys in Texas.

There are certainly perks that come along with working in this line of media, but you don’t always get to check a big hunting accomplishment off your list thanks to a simple phone call.

But that’s pretty much exactly what happened, when I noticed our editor, Eric Pickhartz, take a phone call and casually walk out of the office so as not to disturb anyone. When he came back I glanced in his direction and saw the big eyes and slight smirk that signaled he had some news, and needed to share it. Like, NOW.

“Want to go turkey hunting in a few weeks?”

Does anybody really need more than a millisecond to answer that?

Editor Eric Pickhartz picks things up from there:

I’ve known Andrew Howard from Can-Am and Birchwood Casey’s Mike Capps for a little while, and knew enough to be positive they’re the kind of good, genuine people I enjoy spending time and can see eye to eye with. When they extended an invite for a turkey hunt down here in Texas, it was a no-brainer. Good people, good country, and likely some good hunting. Further details revealed that the hunt would be on a 24,000-acre ranch a little more than hour west of Abilene. It’s apparently a popular destination for whitetail hunters, but turkey behavior on the property was generally unknown, at least to us and the guys who’d be coming down from Missouri.

A guide from Wildlife Systems Inc. would help us scout our first day there, noting an area he’d knew the birds had been roosting. There were a few blinds set up and, admittedly, active feeders around the property, but there’s never a guarantee in any kind of turkey hunting.

Given the uncertainty surrounding our chances of success, we faced the possibility of striking out altogether.

That was hardly the case, as we would reap the benefits of following our hosts’ lead. Less than a day and a half of hunting yielded unexpectedly good results by every single one of us.

Eric recaps the beginning of his hunt:

Since we were each allowed two gobblers apiece, we split up into groups of two. Andrew and myself took a spot near the roosting site; Mike and David went to a spot they’d taken an interest to on the other side of the property. Andrew had trailered a brand new Can-Am Defender Lone Star Edition side-by-side to the ranch, and we’d gotten the chance to drive around the evening before our hunt. It was a long, barely beaten path to where he and I would be hunting, and the Lone Star Defender couldn’t have been more perfect for the job.

We reached the point where we’d park the machine and head into the blind, and not one minute after turning off the key did we see, and hear, a hen no more than 60 yards to our left.

That “freeze” instinct every hunter knows about kicked in, but we looked up in time to see her fly away behind us. After taking some cautious steps forward we noticed another hen, barely dodging her attention before scrambling ahead, quickly sticking a hen and jake decoy in the ground, and dipping into the blind. We thought we’d goofed it up already, and sat with admitted guilt and negativity occupying our minds.

Mike and I set out a pop-up blind near a deer feeder he’d spotted when scouting the first day. Given the landscape and vegetation of the area, Mike seemed fairly certain we’d see birds. We hopped in a Can-Am Maverick Trail before first light and started driving to our spot. The side-by-side was loaded with two decoys (a jake and a hen), as well as our two Mossberg 930 shotguns and a box of 3-inch, 5-shot Kent Ultimate Diamond Shot shells. Mike parked a healthy distance from the blind, and from there we would grabbed our gear and continued on foot. After a stealthy hike and bit of glassing, we put the decoys up and climbed in the blind not a moment too soon. No more than 90 seconds after we both made ourselves comfortable, two hens came through. The first part of Mike’s strategy had already come together.

Turkeys won’t generally obsess over feeders like deer or hogs will. Instead, they’ll simply make a quick pitstop and keep moving. Mike doubted the gobblers wouldn’t come in immediately. However, he predicted a few hens picking over corn, some subtle calling, and a jake decoy in the middle of it all would be too much for a tom to resist.

Eric had his fortunes turn around:

When a few more hens showed up and noticed our decoys, it at least settled my mind a bit, knowing we hadn’t scared every bird for a mile. Sure enough, a handful of gobblers, rather quietly but pretty dang quickly, came from over our left shoulder and into the decoys.

Almost instantly, the biggest long beard started to get after the jake decoy. It was not messing around. Andrew confirmed my initial thoughts: “Take that big one,” he said. Roger that.

I’d figured a squared up shot with the shooting sticks Andrew offered made the most sense, but I didn’t anticipate the height of the blind window. A classic mistake of trying to use something without the practice or experience led to a near sabotage of the entire shot.

I got my act together, saw one of the birds slowly begin to puff up, and heard Andrew say, “Shoot that strutter in the face.”

I did just that, and thanks to his preparation and quick thinking, Andrew picked up his gun, aimed at one of the long beards that didn’t fly away, and dropped it less than 8 seconds after mine. David brings the story back to his blind:

The first couple hens kept moving, but were followed by a few more, and then several more after that. We sat tight, anxiously anticipating a gobbler to trail the pack of hens that seemed to never end. He wouldn’t show that morning, though.

The hen activity came to a halt around 11 a.m., so we decided to stalk the hens on foot. While trekking through hill country, we hoped to to cause some disruption with a box call, but to no avail. So, we decided to head back for lunch, taking bets on whether or not the others got lucky.

Eric explains just how lucky they ended up being:

Initial excitement and adrenaline started to wear off a bit, and we realized it wasn’t even 7:30 a.m. With some patience and good fortune, we could wait out another gobbler or two.

It barely took ten minutes before Andrew shushed me after peeking behind the blind in the direction the first flock had driven in from.

Another long beard, barely viewable out the side window, was coming over the hill and towards us. Another had wandered over as well, and waiting for them to separate enough for a clean shot seemed to take an eternity.

It eventually happened, and I had one in my sights long enough to confidently take it. Once again, the quick-acting Andrew followed with a shot at the second tom seconds after, and with four shots before 8 a.m., we had four birds on the ground. Upon our arrival back at camp, we could see the Can-Am bed full of turkey feathers. The two had collectively dropped four gobblers, tagging out in the first hour and a half of what was supposed to be a three-day hunt.

Needless to say, if the pressure wasn’t on before, it was now.

After a quick lunch, Eric and Andrew cleaned each of their birds and we made our way back to the same blind. We decided we’d try that blind one more time before moving to where they’d just hit the jackpot. We set up our decoys again and climbed back in the blind around 2 p.m., convinced our persistence would pay off.

We sat patiently for the first four hours, seeing at least 10 hens make their way through. Mike would break out his trusty box call every now and then, but still, nothing but hens.

Then, around 6:00 p.m., we heard a gobble way off in the distance—the moment we’d been waiting for all day.

Mike laid out one more aggressive series of calls.

“They’re coming now,” he whispered to me. “Get your gun ready.”

Coming was an understatement, as two gobblers came in at an all-out sprint with tunnel vision pointed right at that jake decoy. The second part of Mike’s plan was now taking shape.

The two gobblers relentlessly pecked and bullied the decoy until I took a shot at the larger bird, which looked to be about 3 years old.

“You smoked him, dude,” Mike said to me with excitement. “Take the other one, too. These are yours.”

Then, as the dust settled and the hens ran off in what seemed like a single-file line, two shells lay next to my boots and two gobblers lay next to our decoys. Mike was the only one left, and all it took was another morning of hunting for him to see two toms flopping.

Collectively we had eight birds, countless great conversations, and one excellent memory to last us forever. We can’t thank Andrew and Mike enough, and want to make sure it’s known that the hunt wouldn’t have been nearly as great, harvests or not, if it weren’t for them and their generosity. When you get to hang out with people like that, doing things like that, and still call it work… You’re a lucky son of a gun.

Let us know of other hunting trips we should take, and we’ll be sure to report back after each one. 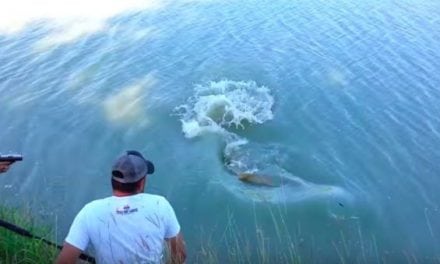 Well, This is One Way to Land a Big Alligator Gar in Texas 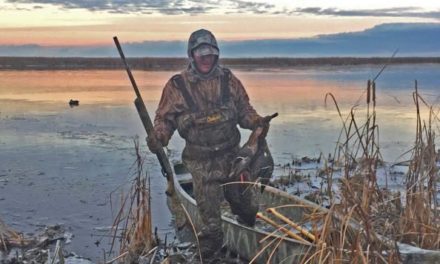 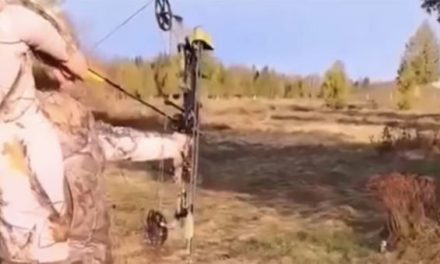 Near Miss: Girl Shoots Arrow at a Beer on the Ground, and It Ricochets Right Past Her Head 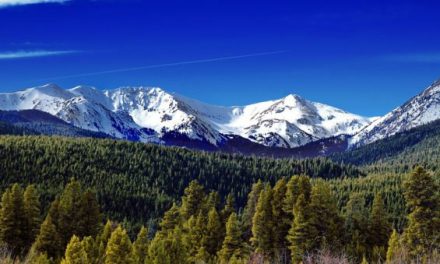 Hunting and Fishing to Expand to 77 National Wildlife Refuges