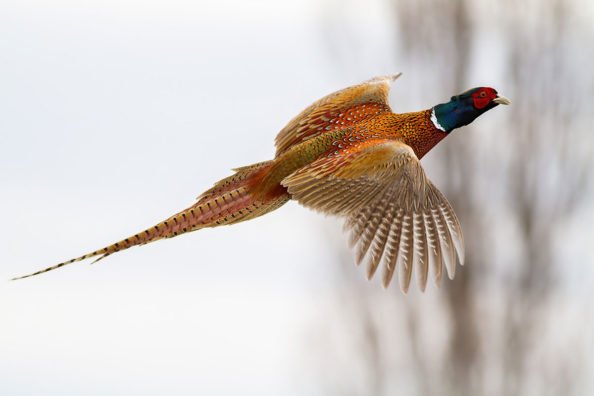 Pheasant Hunting: The Ins and Outs for the Uninitiated


Here is just about everything you need to know about pheasant hunting in America.

Though it’s a true symbol of the hunting heritage in America’s Heartland, pheasant hunting is not originally an American activity. In fact, the ringneck pheasant has been one of most successful and revered game birds ever established as a stocked animal.

The ring-necked pheasant was first brought to the shores of the American West Coast back in 1881. Specifically, they were brought to Port Townsend, Washington. The original 60 Chinese ring-necks were brought across the Pacific Ocean by Owen Nickerson Denny and his wife in an effort to introduce a resident population in their home state of Oregon.

Unfortunately, most of the birds died en route, but some of the survivors were stocked into the lower Columbia River Valley. This didn’t dissuade Denny, as he had even more pheasants shipped in 1882 and 1884. It was around that time that he successfully introduced ring-necked pheasants into Oregon’s Willamette Valley and on Protection Island in Jefferson County near Port Townsend.

In the coming years, pheasants not only survived but truly thrived, becoming so common today that they seem more like a native species than one that was established from overseas not so long ago.

Here’s some pertinent info on their life cycle, advice on where you can hunt them, and several other factors that make pheasants one of our favorite game birds ever. 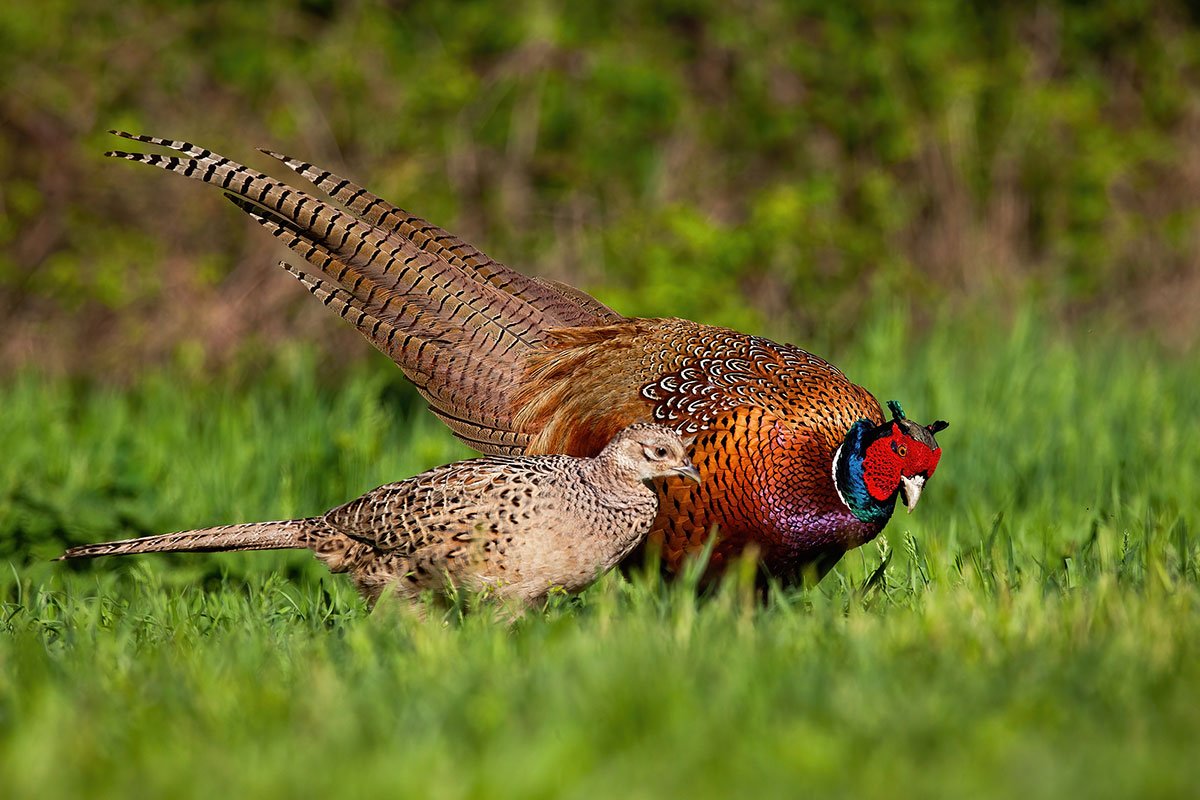 Rooster pheasants have a beautiful iridescent copper-and-gold plumage with a red face and a glowing white collar. They have a raspy crow that is unique to the species and can be heard from up to a mile away. The loud flyers can burst from the brushy cover while cackling the entire time.

In spring and early summer, you can listen and watch for males calling and putting on a wing-flapping display in hedgerows and on field edges.

They are intensively managed and stocked as a game bird in most areas of North America, and some populations are maintained by releases of farm-raised birds. At the same time, many areas have established wild populations that survive and thrive on their own.

Pheasants love to live in and around field edges with food sources such as leftover grain in harvested fields, seeds, and buds. They will eat just about any insect that they can catch, even earthworms, and they love munching on any berries that they can reach.

Breeding season is in the spring when roosters will fight for mating rights with other males. Successful roosters will then mate with multiple females, then defend them by assuming an elevated position and crowing loudly while drumming his wings.

Hens make a nest site on the ground in dense cover, which is usually a shallow depression lined with grass, leaves, and weeds. Her clutch of eggs is generally 6-12 which incubate around 23-28 days before hatching. The downy young leave the nest with the hen shortly after that, mostly feeding themselves for about 10-12 weeks.

The ring-necked pheasant is distributed from Washington and Oregon in the upper northwest, across the midsection of the United States, stretching all the way to New York and Pennsylvania. Maybe nowhere is the population of these birds more incredible than in South Dakota, where wild birds seem to dwell behind every blade of grass. 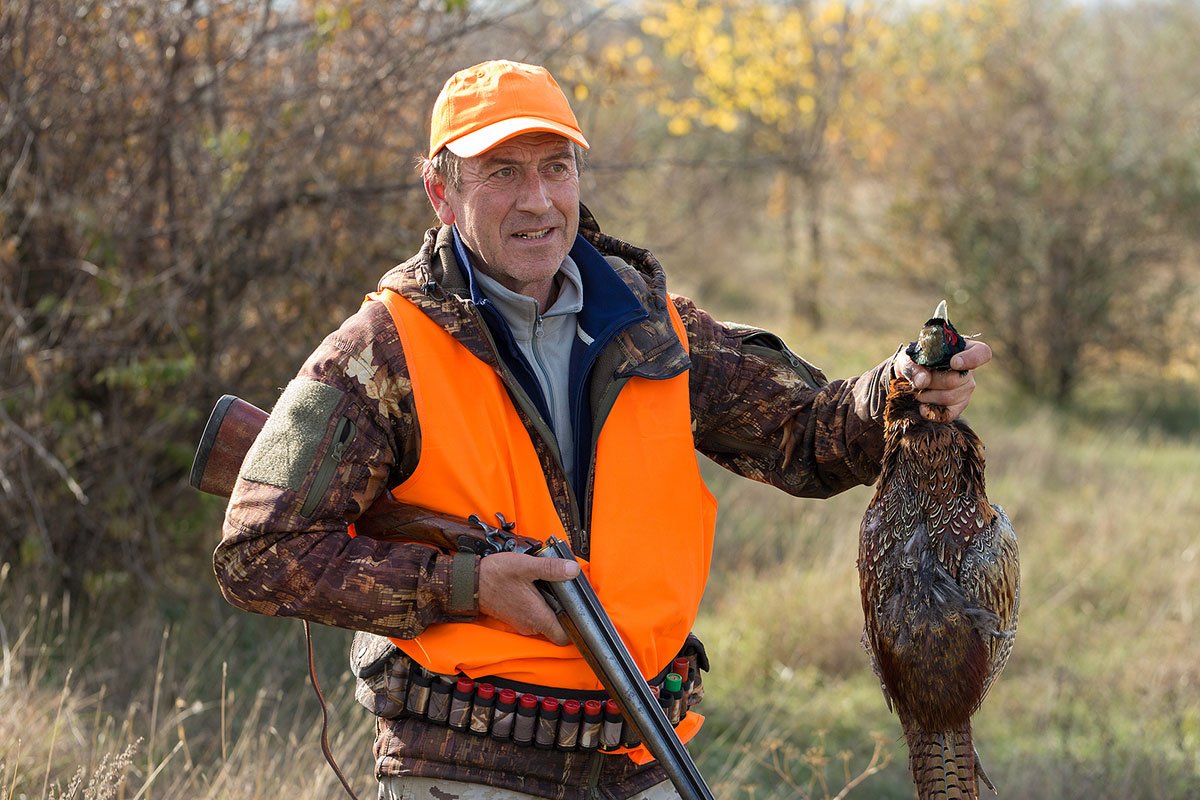 Pheasant hunters aren’t unique to North America. In the UK the shooting of game birds, particularly pheasants, is as much a tradition as it is a pastime.

Upland bird hunting for this game bird typically requires a small game hunting license and a knowledge of the hunting regulations in your area. Hunting opportunities are based on wild pheasant and stocked pheasant populations along with the amount of accessible pheasant habitat available.

For the most part, pheasant hunting season begins in the early fall and runs to around the middle of November. If you are near a licensed pheasant farm, or are a member of a pheasant club, then the seasons are longer. Many pheasant clubs and farms can begin to hunt in early September and run throughout the winter.

Depending on the area where you wish to hunt, bag limits can be strictly two birds per day, sometimes more. Many areas only allow the taking of roosters, where others allow for the taking of both roosters and hens.

It seems that like most hunting (and fishing, for that matter), pheasant hunting tends to be at its best early in the morning and again in the evening. Birds that have been resting during the night get active quite early during first light, especially when it gets cold.

For those hunting without a bird dog, learning to drive birds can be a very effective method to get them up and moving, especially early in the season during warmer weather. Having one or more hunters positioning themselves on the opposite side of a hedgerow or at the end of a field while the others walk through the cover can almost always result in a few shots.

Even though pheasants (particularly roosters) like to hug field edges they will also frequent water holes. In hotter areas these are good places to start looking for birds, especially during the heat of the day. Many wildlife management areas have swampy areas replete with cattails, which these birds love to hide in. Often times if you can get a flush in these hotspots, be ready, because there are almost always multiple birds there.

During successful drives or in areas where the birds are cooperating, hunters need to be patient and wait for the flush. Sure, it’s easier said than done, but nothing gives a hunter more opportunities to get it right quite like pheasant hunting. The same can be said for those times when it seems like every pheasant in that great field you’ve been hunting has picked up and left for greener pastures. If you know birds are in an area but have hunkered down, work the cover slowly and methodically. 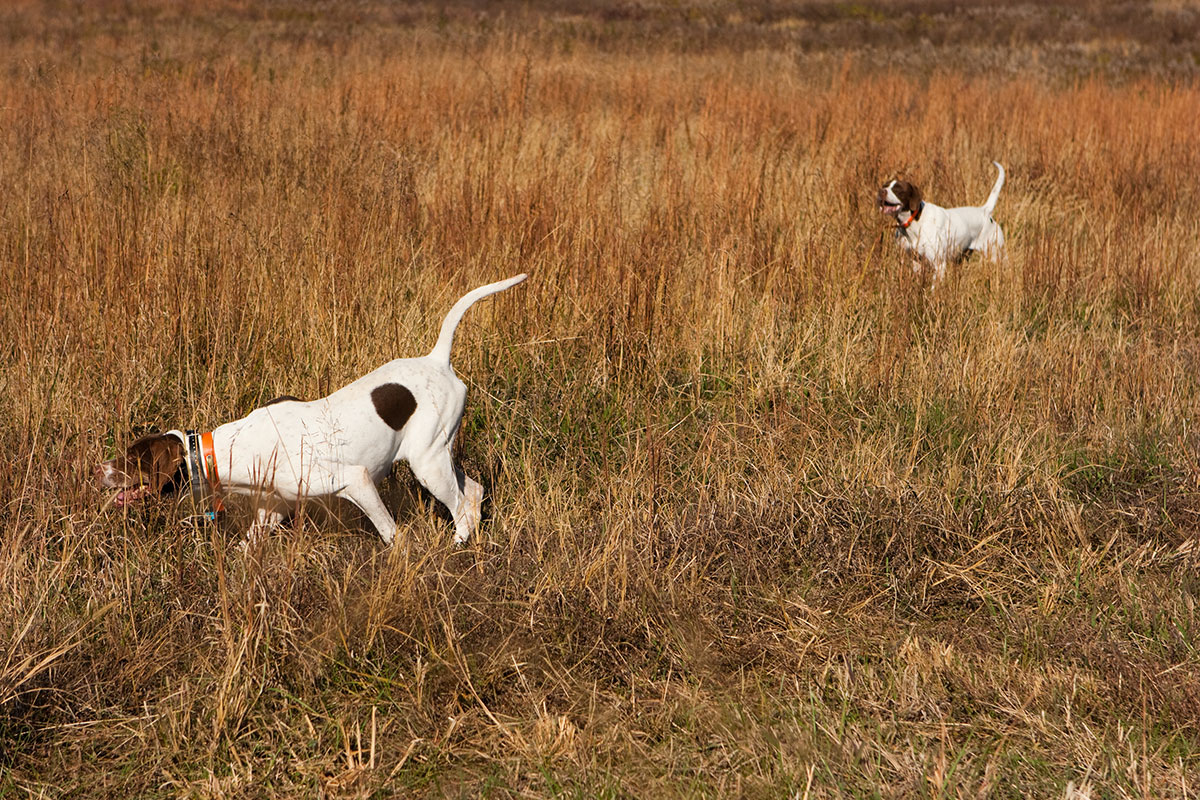 Here is where the rubber meets the road; upland bird hunting and gun dogs go together so well. The age-old argument of pointer versus flusher can be thrown out of the window, because both are great for pheasant hunting. A solid, finished gun dog is a joy to behold in good pheasant cover and can tip the scales in your favor. To be really successful you need a canine that has had some experience, but even a first year bird dog can have great success chasing roosters.

Maybe the biggest advantage to having a great bird dog is the ability to track down pheasants after they are shot. This is where your four-legged hunting partner is worth his weight in gold as a wounded, running bird is the stuff of nightmares for most upland bird hunters.

Flushers such as Labrador and Chesapeake retrievers are excellent at getting tight-holding birds out of heavy cover, and pointers can lock on and hold hidden birds. Both retrievers and pointers can find downed birds and bring them to the hand, as well as track wily, running birds that are survivors of many hunting seasons.

Any of the good hunting breeds can be great pheasant dogs including the German Shorthaired pointer, German Pointer, Vizslas, Weimaraners, Gordon Setters, Irish Setters, and many more. They are like good rod and reel combos in fishing: you almost can’t go wrong with any of them.

Pheasant hunting clubs are basically a fee-required membership that provides ample area and opportunity to hunt. They provide cover to hunt, all of the birds, and the satisfaction of hunting with friends and other like-minded folks that want to get their dogs some good field work and shoot some pheasants for the dinner table.

The downside to pheasant clubs and pheasant farms is that it is basically a canned hunt. Put and take hunting is not for everyone, and many hunting veterans don’t care for it. It is a simple matter of the thought process for each individual planning to hunt. For those with young dogs there can be no better way than to get them afield with a better than average chance to find birds and either point or flush.

For those that don’t care to hunt at a club or a private pheasant ranch, most Wildlife Management Areas release birds in the beginning of the season, and many times towards the end for those who want a greater challenge. 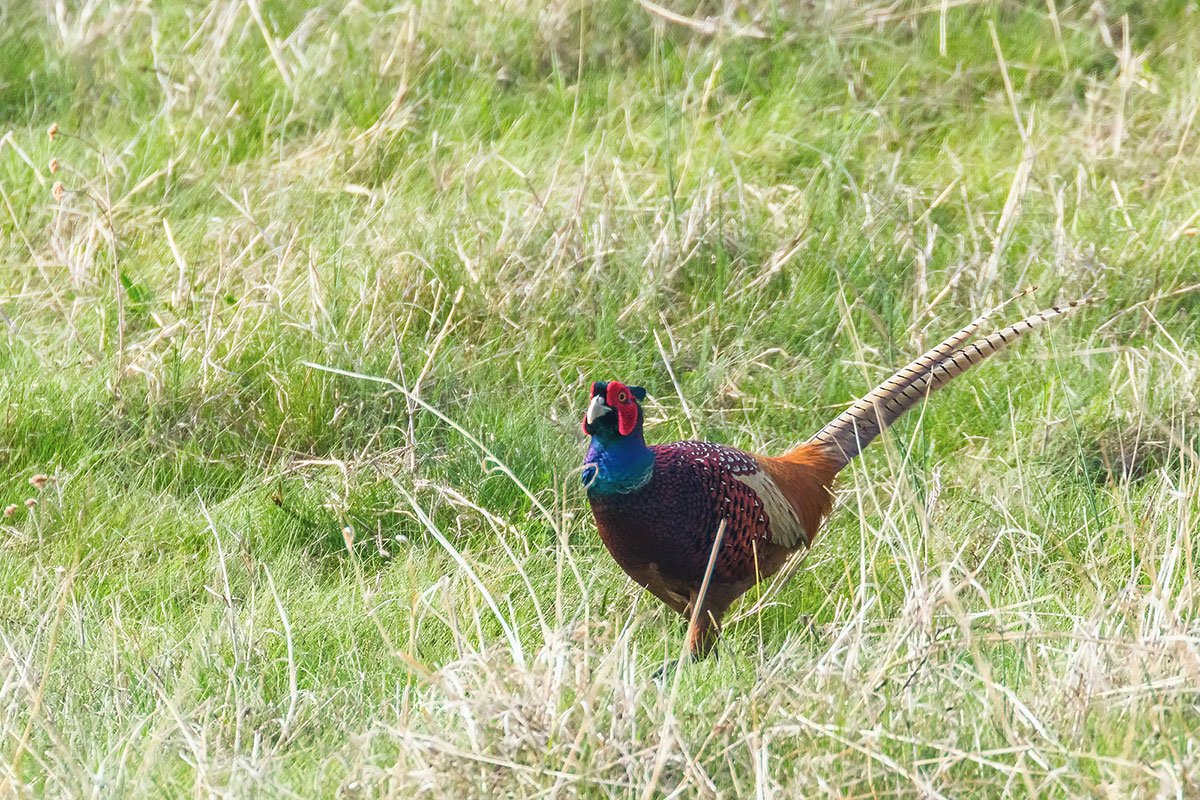 Maybe the best thing about pheasant hunting is that there is no need for scent elimination, decoys, attractant sprays, treestands or even calls. All it truly requires is a hunter, a shotgun and the ability to outsmart the birds.

A few of these things may seem rather obvious, but we want to be thorough.

There are so many solid choices for a pheasant hunting gun that it could take all day to list them all. Any 12 gauge that you like and are familiar with works just fine.

For those with an eye towards the flashier things in life, there are many insanely good, wood inlayed, custom, over/under shotguns that would fit the bill. Some folks like to go down to the lighter 20 gauge for ease of carrying, but a good 12 gauge loaded with 2-3/4 inch lead #4s have dropped enough pheasants the world over to make it the obvious choice.

Pheasant Hunting in the U.S.

A pheasant hunt is one of the most rewarding activities that there is for sportsmen and women, not to mention for youth hunters as well. Whether we’re hunting on private lands or public lands, the honest truth is that pheasant hunting is one of the best hunting experiences you can have. Pheasant stocking programs for upland hunting allow for some of the best walk-in hunting anywhere in the land and it’s something that anyone can do.

Purchasing a small game license is one of the cheapest ways to take advantage of this type of activity, and the season dates are usually within a time of year when hunting is still comfortable.

Above all, pheasant hunting is an experience everyone should try at least once.

NEXT: 6 PICTURESQUE HUNTING AND FISHING SPOTS WE WANT TO ESCAPE TO

The post Pheasant Hunting: The Ins and Outs for the Uninitiated appeared first on Wide Open Spaces. 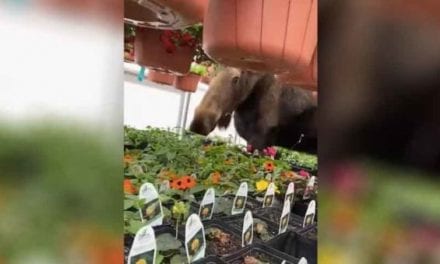 Cow Moose With the Munchies Finds Her Way Into Greenhouse, Digs In 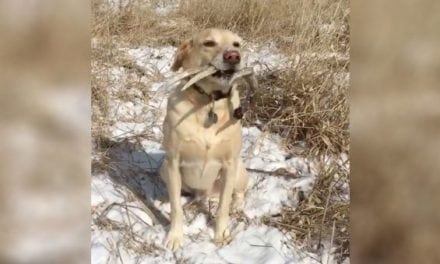 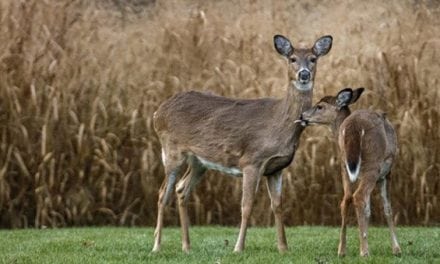