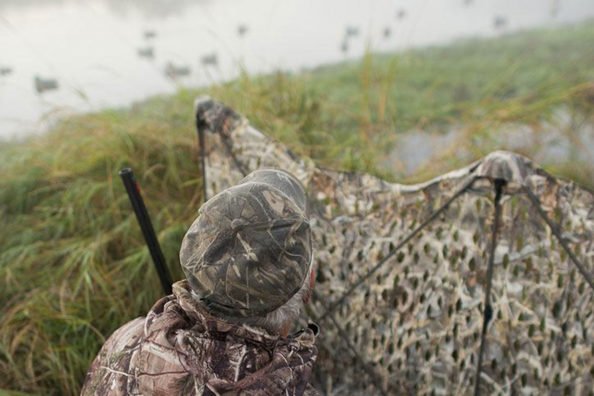 
Here are a deadly dozen decoy spreads that you can use this fall to fool even the most decoy-shy birds.

We hunters tend to fall into a rut when it comes to decoying ducks; we use the same spread week after week with declining results. If weather doesn’t push in new birds consistently, then you’re just showing them the same thing each time you go out. The key is diversity and change.

Change is a constant in a waterfowl hunter’s life, and should be in your spreads, too. If you’re hunting mallards, experiment with both drake and hen mallard decoys, but if you’re hunting different species like canvasbacks, teal or pintails, you’re going to need new decoys altogether. Changing out the number of decoys, as well as both still and motion decoys, can also be very effective.

Goose decoys can also be an additional touch that other hunters in the area are not using, and will make your spread the most popular spot. 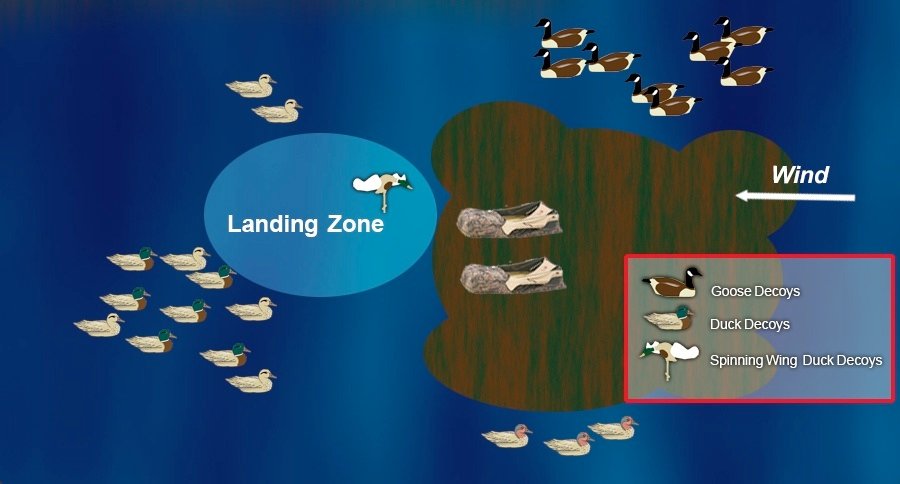 Small meandering rivers can offer some of the best waterfowl action each fall. Many have islands you can set up on with plenty of shallow water nearby for ducks to lounge in. Locate a spot like this and deploy this spread in open water for some hot action. Notice how the geese act as a blocker on the one side upwind; this will keep the ducks from swinging too wide of your setup. 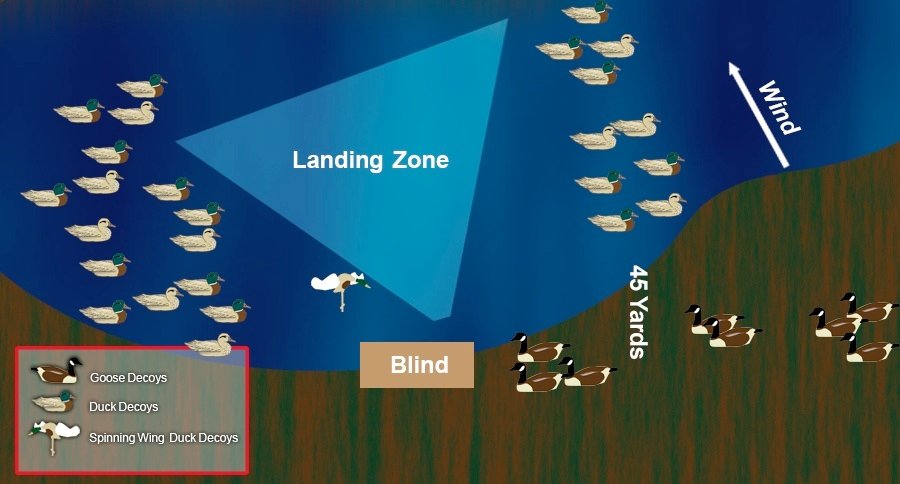 Reservoirs offer a great place to hunt ducks, but how do you get them to commit to your spread? First, find where they like to go, not all areas of the reservoir will attract ducks the same. Then show them something new, like this spread. Goose decoys behind your blind on dry land will help convince them this is the place to be. 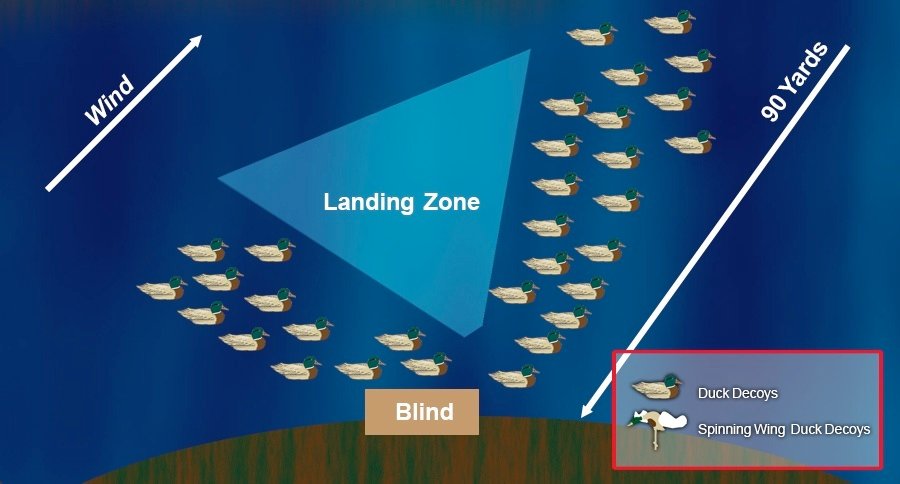 Is there anything more reliable in duck hunting than the famous fishhook spread? Not only will it direct the ducks into the landing zone, but it’s also easy to deploy with long lines. Numerous limits of puddle ducks and diver ducks fall to this spread every fall. 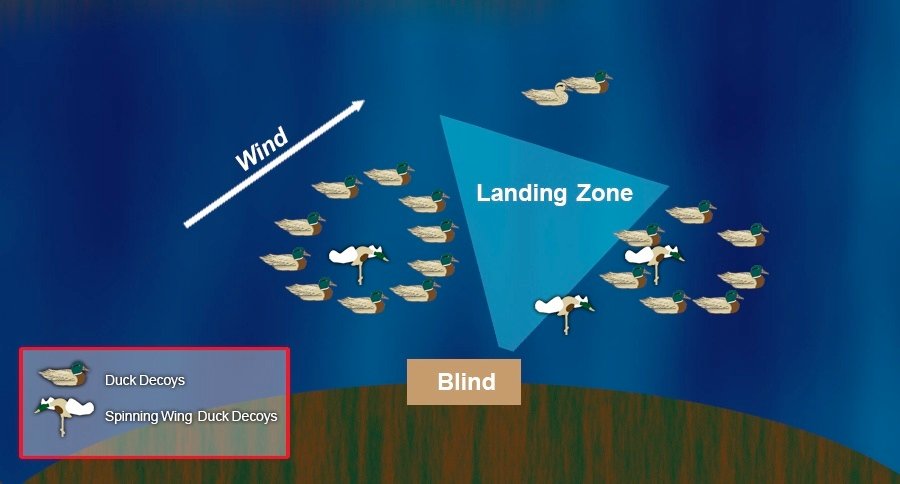 The Double O may look odd, but it works surprisingly well for many hunters every year. Give it a try and see how well it works for you. You might be surprised how many ducks flock into it, especially if other hunters in the area do not use it. 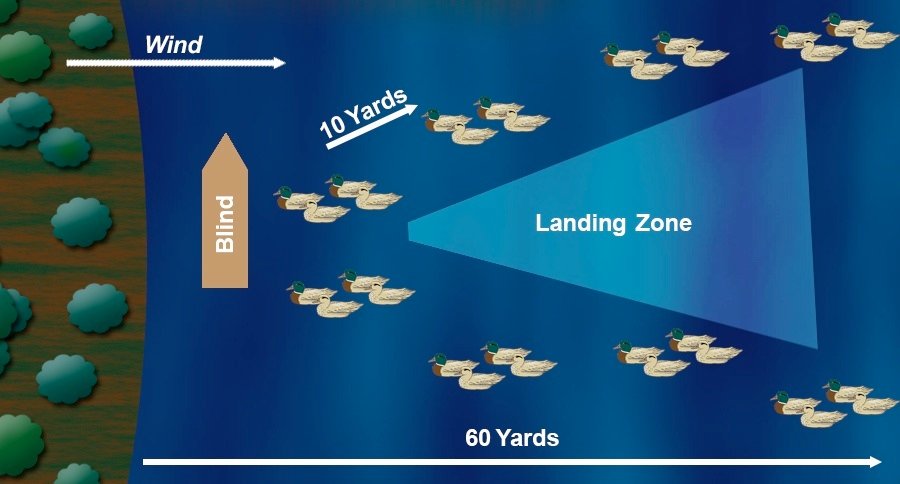 This spread really directs the ducks right down the landing zone. It’s as if the blocks bring them in like lights on an airplane runway. Be sure to keep the sun at your back or you might miss seeing the ducks coming down the pike. 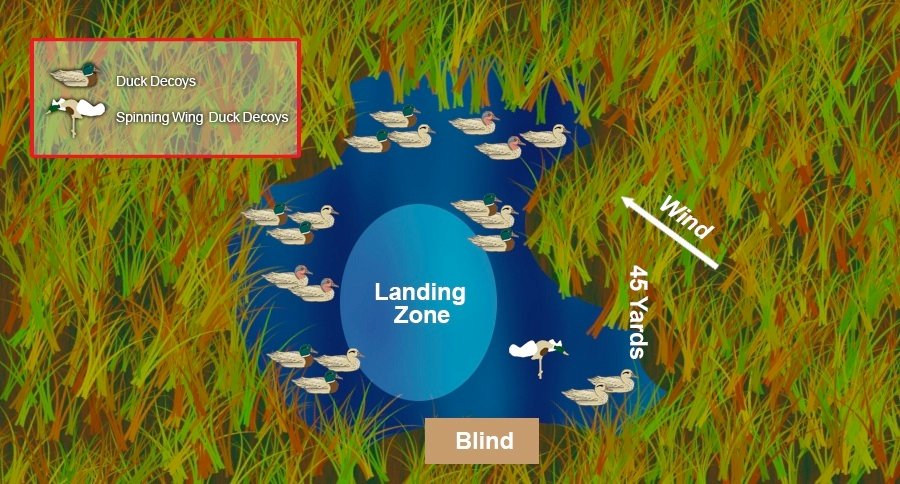 No matter the size or the depth of the water, ducks love flooded fields. Hunting them can be as complicated as you make it. This easy deploy spread will be great for those mornings you’re running late, or don’t feel like deploying lots of decoys. 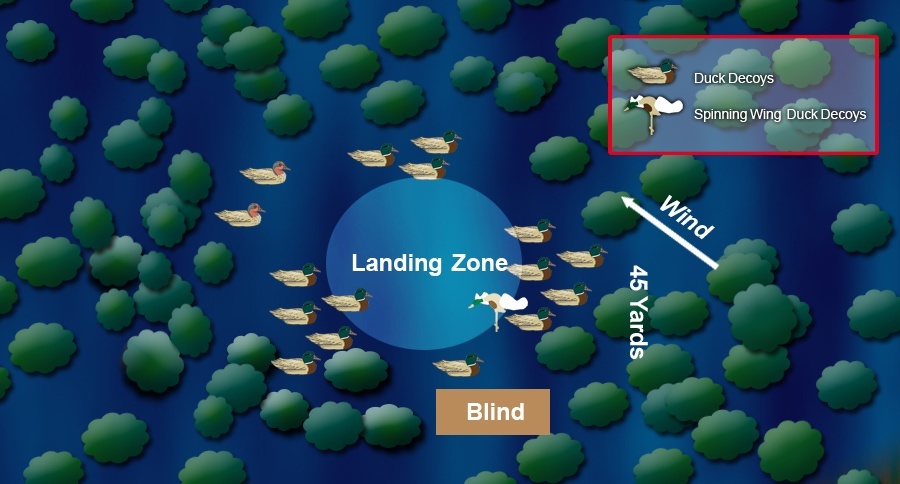 Flooded timber hunting is a southern tradition that everyone should try a few dozen times. Seeing the ducks coming through the trees, legs down with the sun shining off them, is truly something to experience. Here’s an easy to deploy spread that will help you fill your limit this fall in the flooded timber. 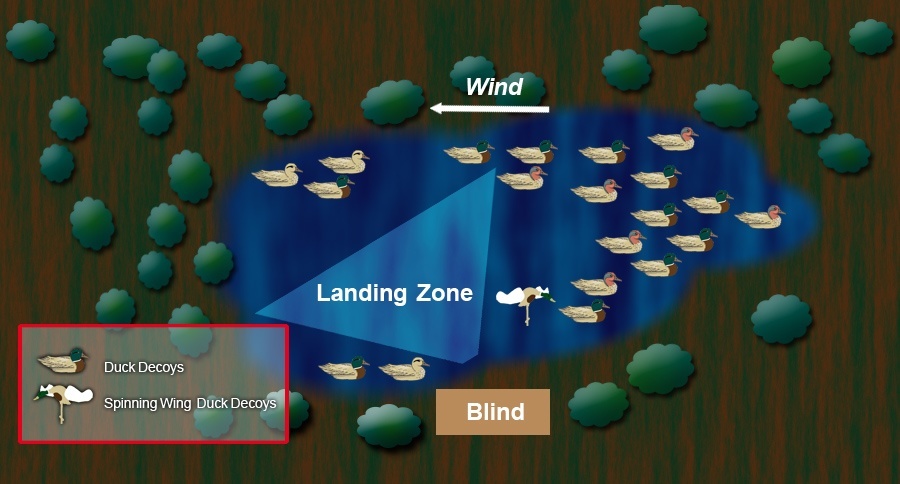 Finding a well-used slough is like hitting the duck lottery. They are not easy to find, and will take some legwork, but generally they pay off. Here is a go-to spread you should deploy the next time you hunt. It resembles the fish hook spread and works just as well with its smaller size. 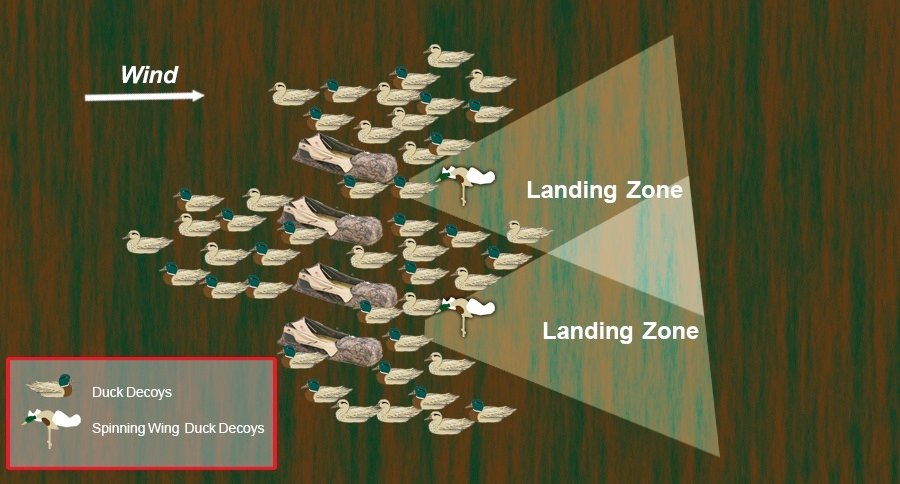 Hunting ducks in freshly picked fields is a blast, pun intended. They tend to decoy well and will be coming in to fill their bellies before they continue their trip south. The key to any good field spread is numbers, so invite a few buddies along and use their decoys as well to increase the number of fakes you deploy. 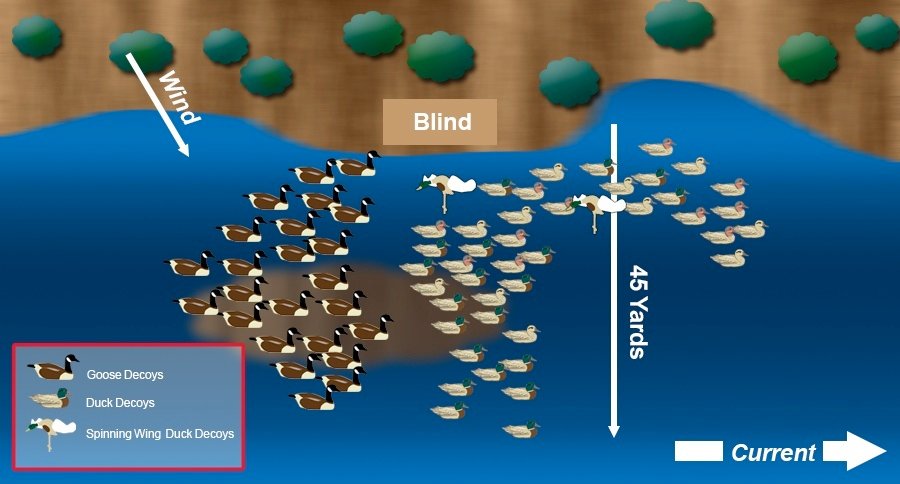 Nothing pulls in ducks better than flowing water. The later into the season you get, the less there is. Rivers are usually a good bet to stay open, unless Old Man Winter sets in hard in your area. This late season spread incorporates geese as well, to add to the realism. 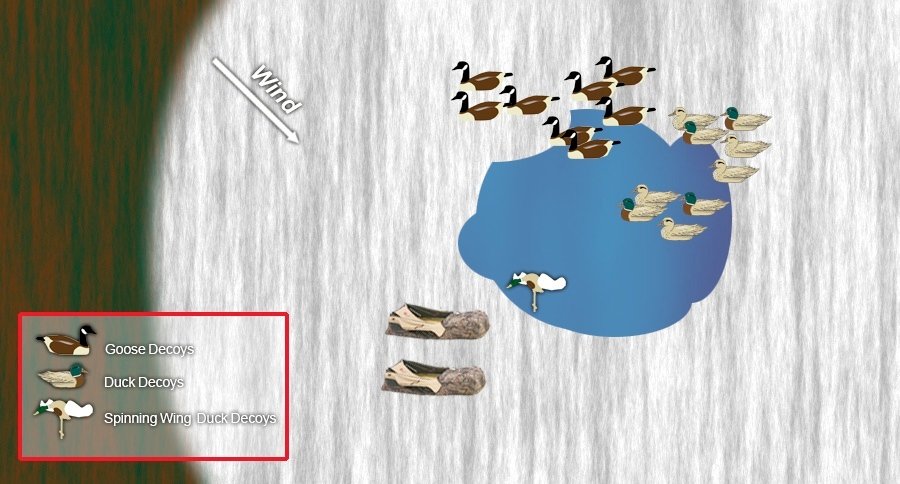 Potholes can continue to produce even late into the season if you’re willing to do some extra work. With your hunting partner’s help, start breaking the ice up in the frozen pothole in big sheets and sliding them under the remaining ice. Take your time and don’t sweat too much or your hunt could be over before the sun rises. Add some goose decoys to increase invisibility and realism. 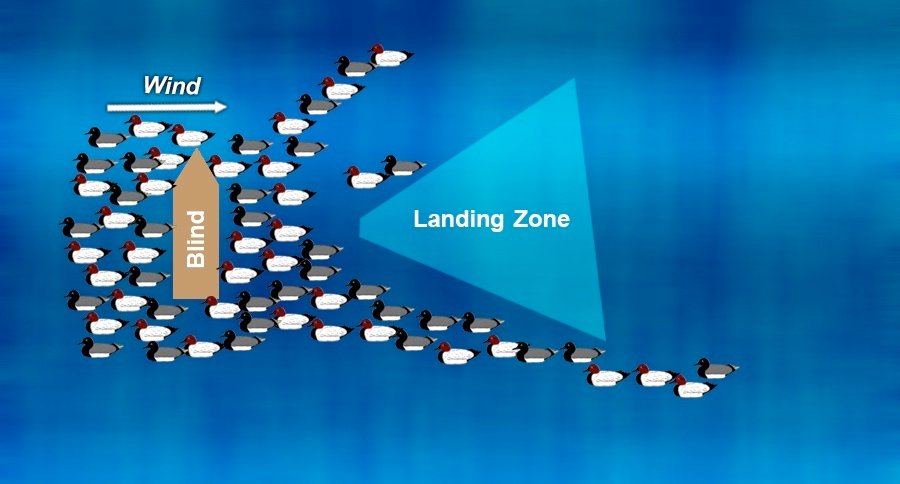 Divers do not tend to get as much press as puddle ducks do, but are still fun to hunt. Here’s a classic diver spread that incorporates long lines and numbers. If you can get a good looking raft of decoys deployed around your boat you should be able to pull them in.

This spread mimics the shallow water spread, or maybe puddle duck hunters have learned from diver hunters and copied their spread for shallow water. Either way, this spread will pull the ducks in for you.

These spreads are sure to work for your next waterfowl hunting adventure. Watch as the flocks fly in.

NEXT: 13 OF THE WORST HUNTING FAILS EVER 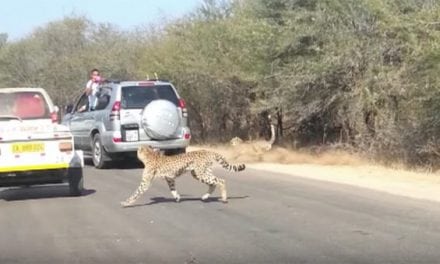 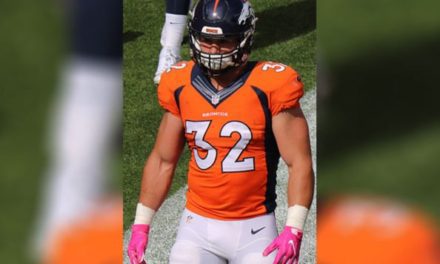 NFL Fullback Spends All His Money on Busch Light, Chew and Hunting Gear 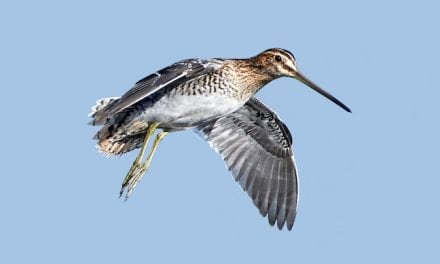 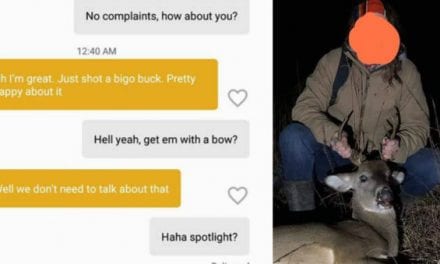