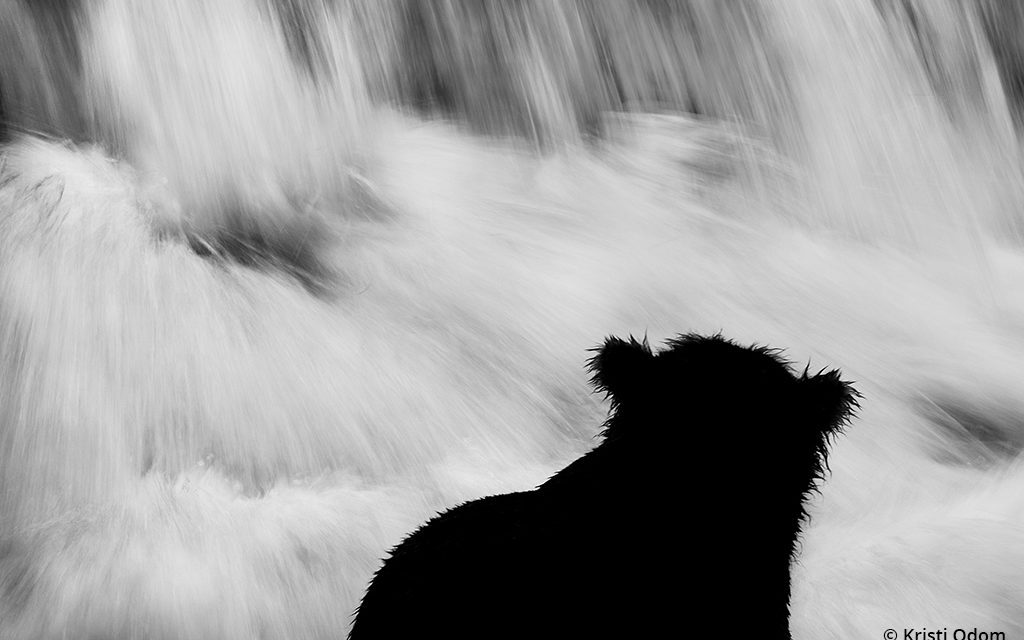 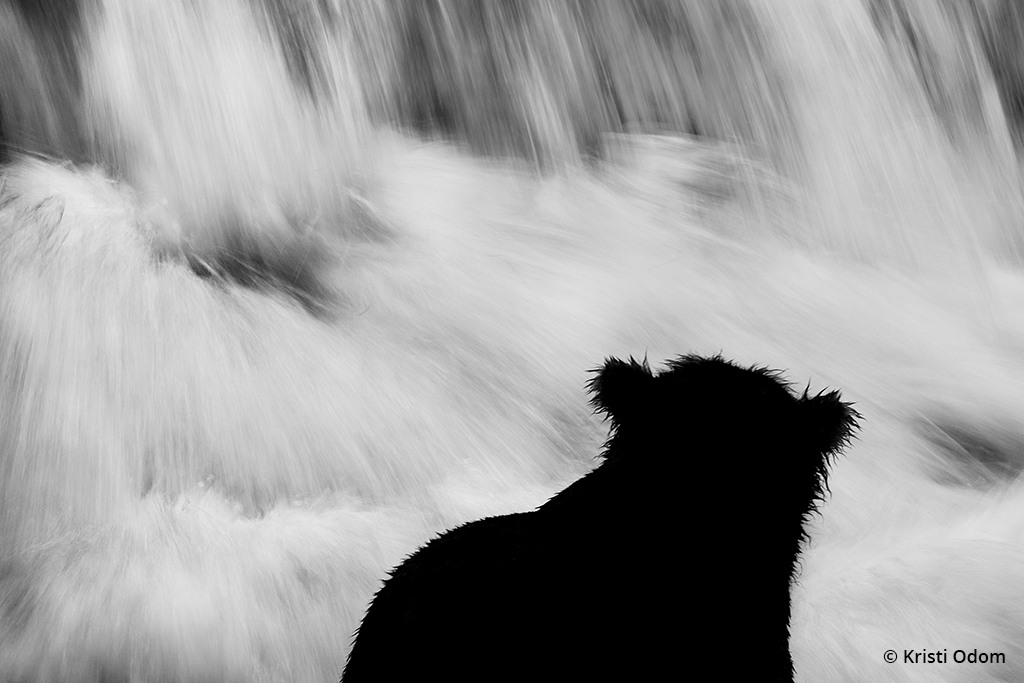 This image of a bear silhouetted in front of a waterfall captures what I felt witnessing the scene—the stillness of the bear against the rushing movement of the water.

I remember the fixer smell I couldn’t get off my hands, seeing my image emerge on paper for the first time as it sat in the developer. I was the darkroom manager at the Georgia Institute of Technology, where I was studying to be an electrical engineer—and slowly falling more and more in love with photography.

I remember spending hours manually dodging and burning my prints with tools made from cardboard, coat hangers and strings. I learned and drew my inspiration from masters like Ansel Adams and Jerry Uelsmann. These artists had ways of leading your eyes through the frame by darkening certain areas and lightening others. They could take you on a journey, leading you down into a scene as if you were walking the path yourself or taking you into their endless artistic imagination. 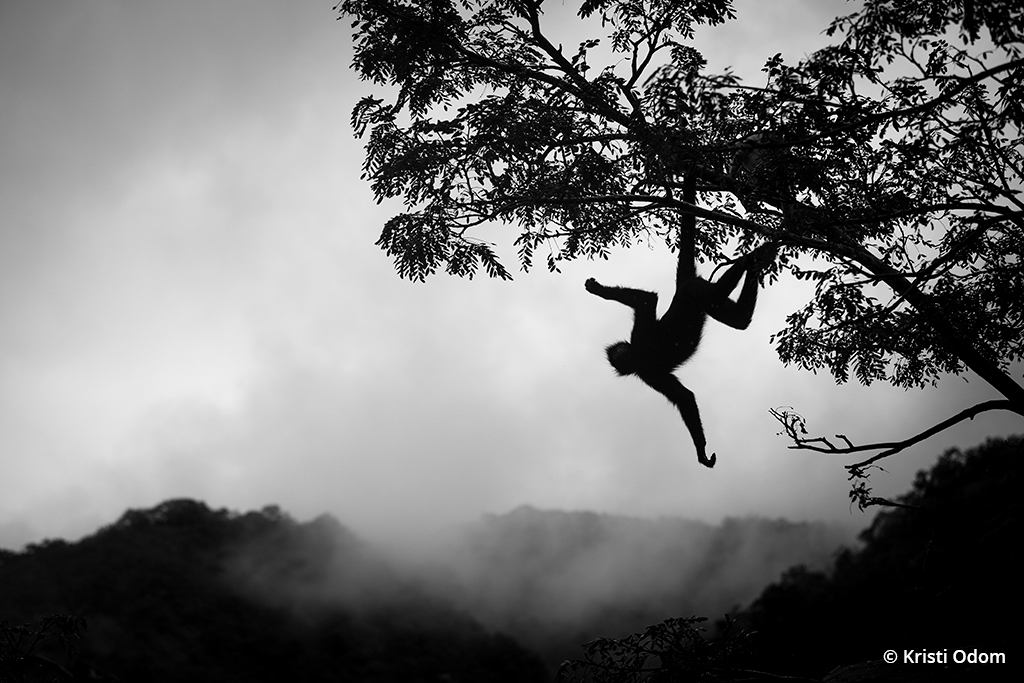 Photographed at La Senda Verde in Bolivia, a spider monkey hangs from a tree at a sanctuary on the outskirts of the Amazon. Including your subject’s surroundings can help elevate your image by adding the location to the story.

Their photographs, as well as the work of other black-and-white masters like Mary Ellen Mark, Gordon Parks, Irving Penn, Sebastiao Salgado, Edward Weston and others, took me to places, shared stories, revealed the extraordinary in everyday objects, introduced me to strangers, shared passions and exposed injustices. They showed me life. I was hooked, and after three years on a full scholarship in engineering, I left and moved to Australia, where I pursued a fine arts degree with a concentration in photo media.

Sometimes our road finds us, and I could have never imagined the journey I was about to take. It has had some major ups and major downs, moments in which I didn’t know from where my next paycheck would come and moments I cried behind my camera because I was so taken by beauty. I love this road and all its turns. 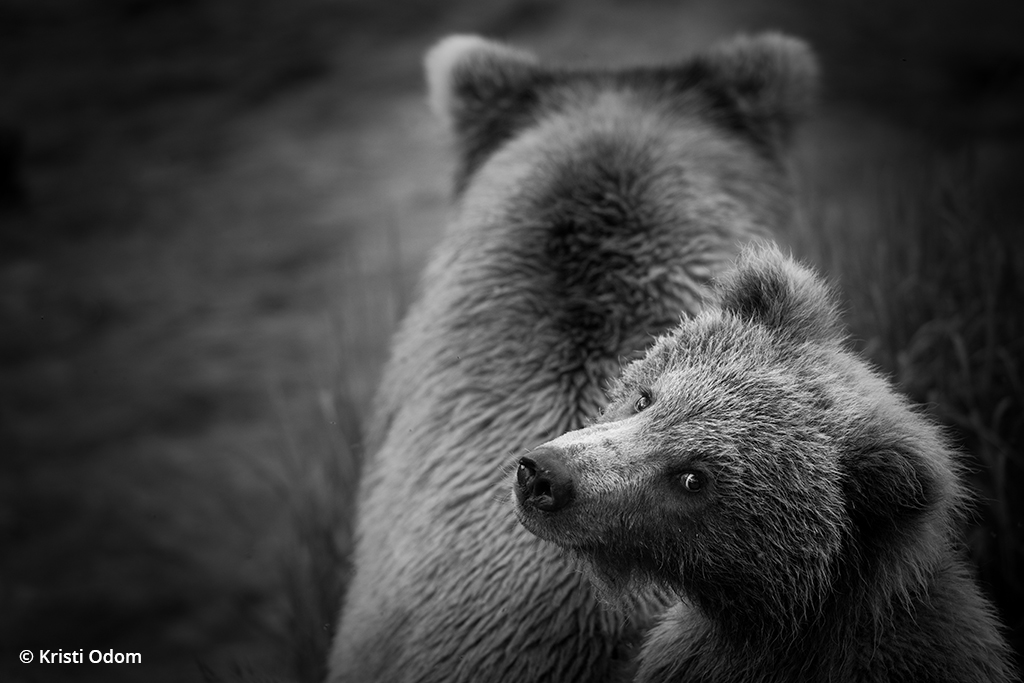 My mission is to use photography to show that animals have emotions, characters and personalities. I am always looking for those moments. In this one between a mother bear and her cub at Katmai National Park, Alaska, mom was taking way too much time fishing, and the cub went back and forth from napping on her back to looking around

I was very hesitant to move to digital photography, and it took me years to switch. I wanted to feel the light through the whole photographic process, how it hits the subject and travels through a camera to burn a frame of film and how it then passes through that film in an enlarger to illuminate a sheet of paper. Digital imaging lost some of that magic, but it eventually lured me in with its ability to allow me to see what I was capturing while on assignment. Being able to take more than 36 frames without stopping was a total game-changer. No more chemicals and no more debating whether to choose Kodak Tri-X or Fujichrome Velvia (my two favorite films) before a shoot—I could change my color space in post, and that was beautiful.

I had the same hesitation when mirrorless cameras emerged with their electronic viewfinders. Once I finally embraced them, the game changed again. Instead of stopping to review images after capture, I could now see the image I was going to get before clicking the shutter. After years of previsualizing what my exposure and other camera settings would produce in the final image, I now know the results as I’m shooting. I often set my Nikon Z 7II’s Picture Controls to Monochrome so I can even see the image in black-and-white before taking the photo. I find that this helps me see the light again—all the shadows, textures and details—and as long as I shoot in RAW, I can convert back to color if I feel the need later. 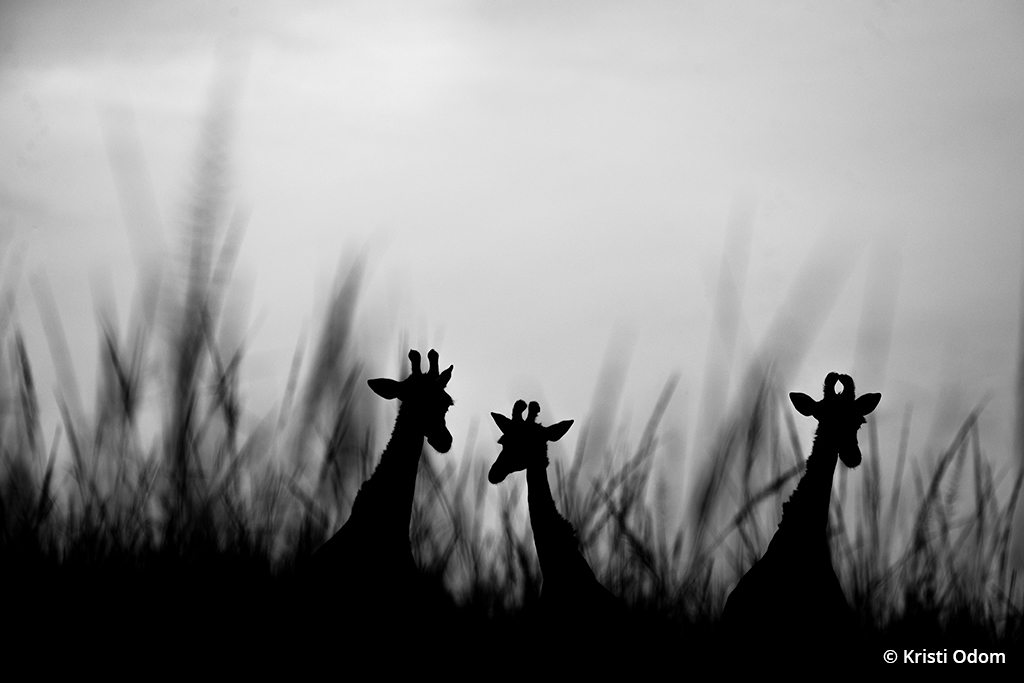 While in my tent just outside of Kruger National Park, South Africa, I heard a noise and walked out to see a whole family of giraffes. I was overwhelmed by their height and their shapes. To emphasize the feeling, I laid down on the ground to use the grass as a textured foreground, which also broke up the simple sky.

I get asked all the time, “Why black-and-white?” There are so many ways I can answer that. My first thought is that it helps me to really focus on the qualities of the light. It brings me back to when and where I fell in love with photography, in the black-and-white darkroom. Sure, removing color can make it easier to guide an eye throughout a photo with dodging and burning, but I think it goes deeper. In the simplicity of black-and-white, we are left with light, textures and emotions.

Why choose color for some images and black-and-white for others? I just let the images speak to me. Sometimes color is a distraction; it can pull our eyes in the wrong direction. Different colors convey different feelings, and if the feeling doesn’t match up with the image, then I take the color away. I have spent years studying eye movement, and it is easier when color isn’t an element. 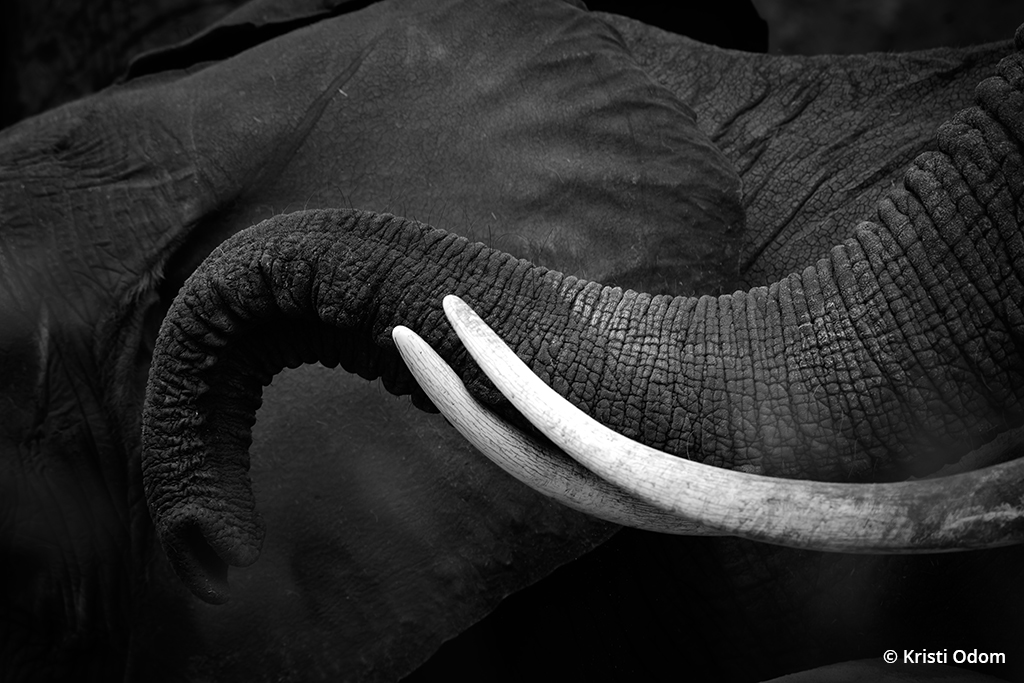 Watching the elephants at a watering hole in Tsavo National Park in Kenya, I was drawn to the shapes and textures of their trunks

Early in my photography, I learned Ansel Adams’ zone system. To achieve all the details and richness in his exposures, Adams split his black-and-white tones into zones denoted by roman numerals from 0 (pure white) to X (pure black). There are areas in those zones in which shadow details work (zone II) and areas in which textures show in white (zone VIII). When I moved to digital photography, I started seeing those zones in histograms. In my head, I numbered the histogram starting at 0 (the far left of the histogram where you can see pure black) and ending at X (the far right of the histogram where you can see clipping white), and I look to see if there are details in blacks at the right spot (around zone II) and textures in whites around zone VIII.

The histogram was instrumental in my shift to a digital workflow. One of the many things that I now love about mirrorless cameras is that I can display a histogram in my viewfinder while taking the photo. I always have it on and am constantly checking my details in both the shadows and the light areas. In all the advanced technology, I still see the roots of the craft. Every time I look at that histogram, I feel a bit of Ansel. 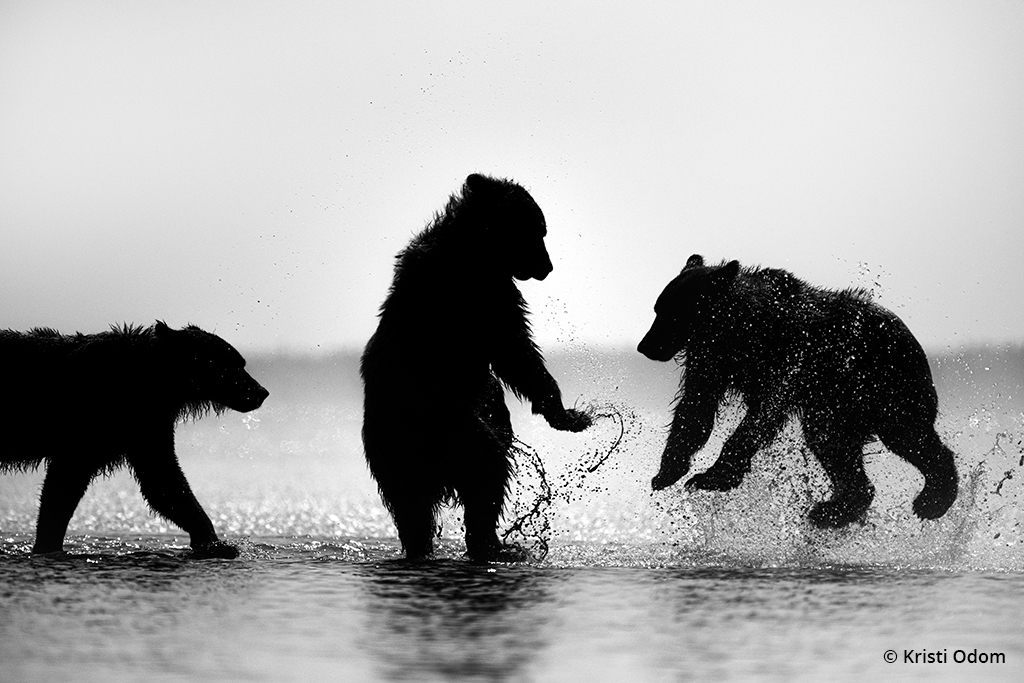 The bears were playing in beautiful light at Lake Clark National Park, then ran into an area in which the light was then behind them. Most of the photographers stopped shooting, since the bears no longer had the light hitting them. My camera was the only one that seemed to be photographing this moment. Instead of moving, I exposed for the background, which dropped my subjects into silhouette, giving me a unique shot that showed the action in a graphic way. 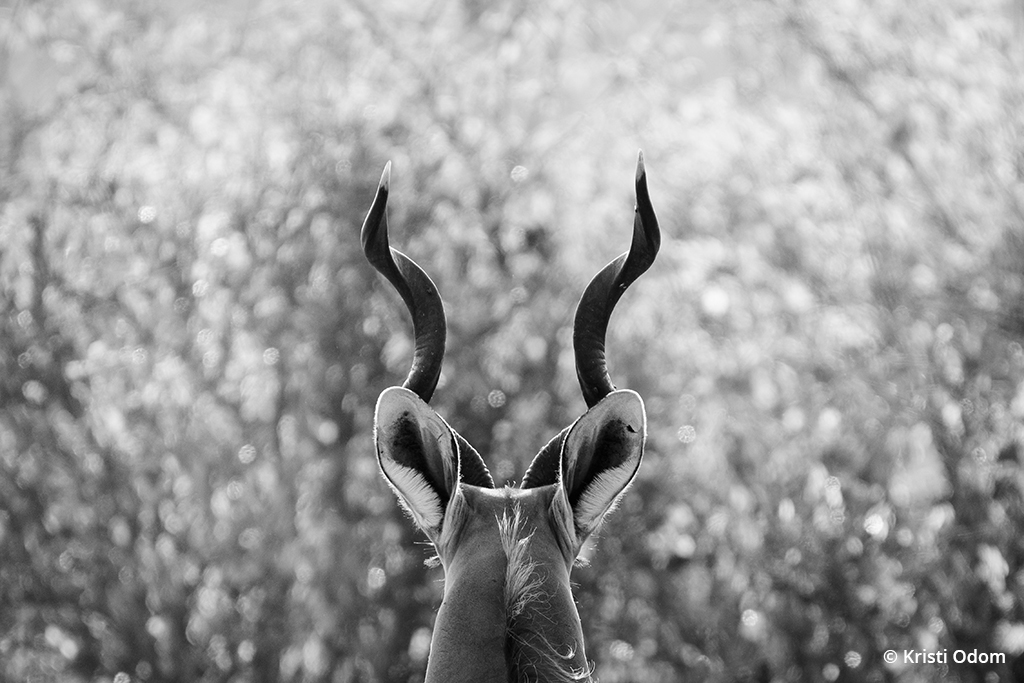 When I saw this kudu in Kenya, I wanted to keep things simple to bring out the shapes of its amazing horns. When there are eyes in an image, they are likely the first thing we see. By taking the photo from behind the kudu, I focused attention on its horns.

The answer to “What do I feel?” is where my voice comes in. Do I feel chaos and movement? If so, then maybe I can find a way to incorporate that into the scene, by slowing down my shutter to show movement, like I did in my photograph of a bear silhouetted in front of a waterfall. I wanted to show the chaos of the rushing water around the stillness of the bear. 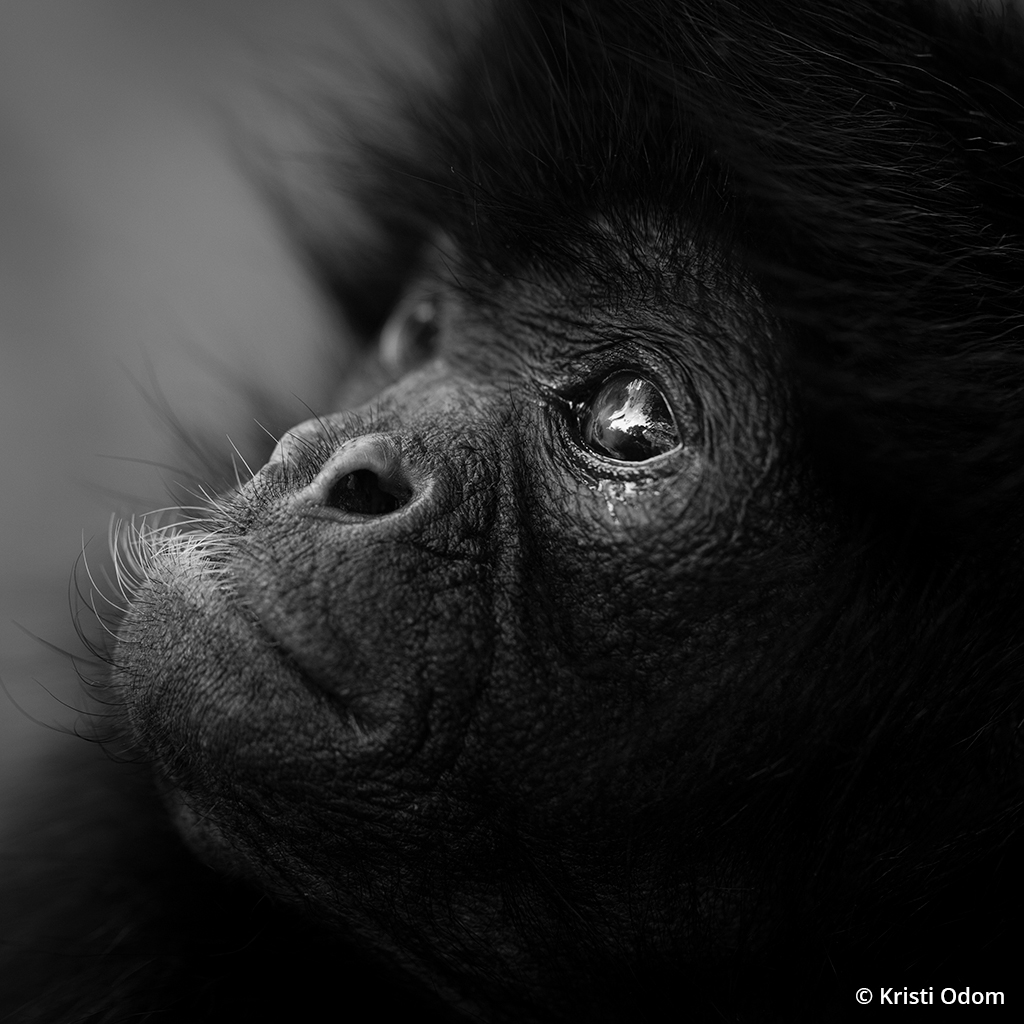 The La Senda Verde animal sanctuary in Bolivia cares for animals that have been ensnared in the illegal wildlife trade. I wanted to capture the eyes of this spider monkey that totally drew me in.

There are so many amazing photographs out there waiting to be made that it can be intimidating. Over the years, I have had some of my favorite images that I couldn’t wait to share get no reactions or even bad feedback. I used to get upset and worked up until I shifted my mindset. My work is a celebration of this world and the beauty that I see. With every image I put out there, it is my way of complimenting mother earth. Those compliments are sometimes heard and sometimes not. It makes me happy to say my thanks and share this planet’s beauty, no matter the reaction.

Photography is a tool to share our passions with the world. Nature is so much bigger than us, and in it, I have found gratitude by slowing down and photographing it. The emotions I have seen in wildlife, the compassion between an elephant mother and her calf, the patterns I have seen in a dragonfly’s wing…I am constantly overwhelmed with this feeling of being small in a world that is so big and beautiful. 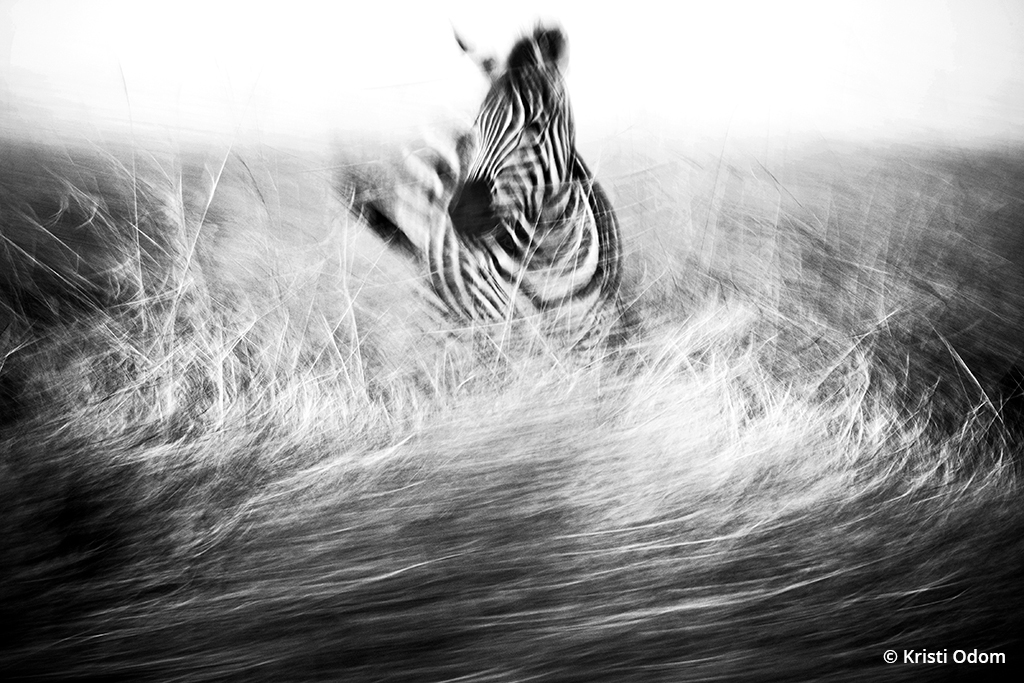 I asked, “Why do zebras have stripes?” I was told that it helps them to blend in and escape predators. I wanted to convey that in my photographic narrative, so as we drove past this still zebra, I set a slow shutter speed, locked in on the zebra, and let the movement of the car bring out the texture of the tall grass, almost blending in with the zebra’s stripes. 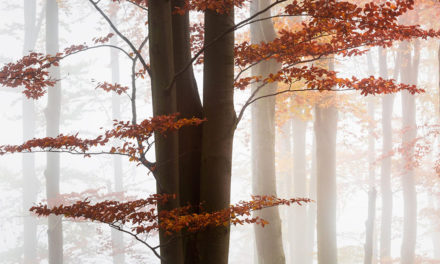 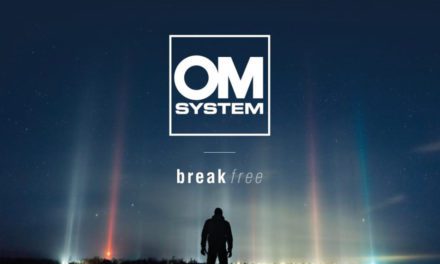 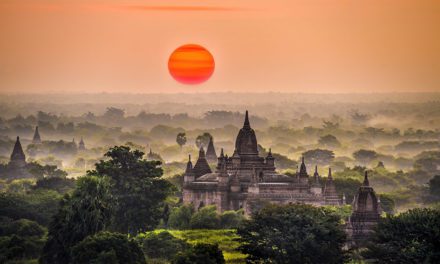 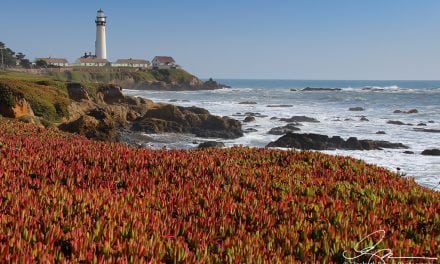