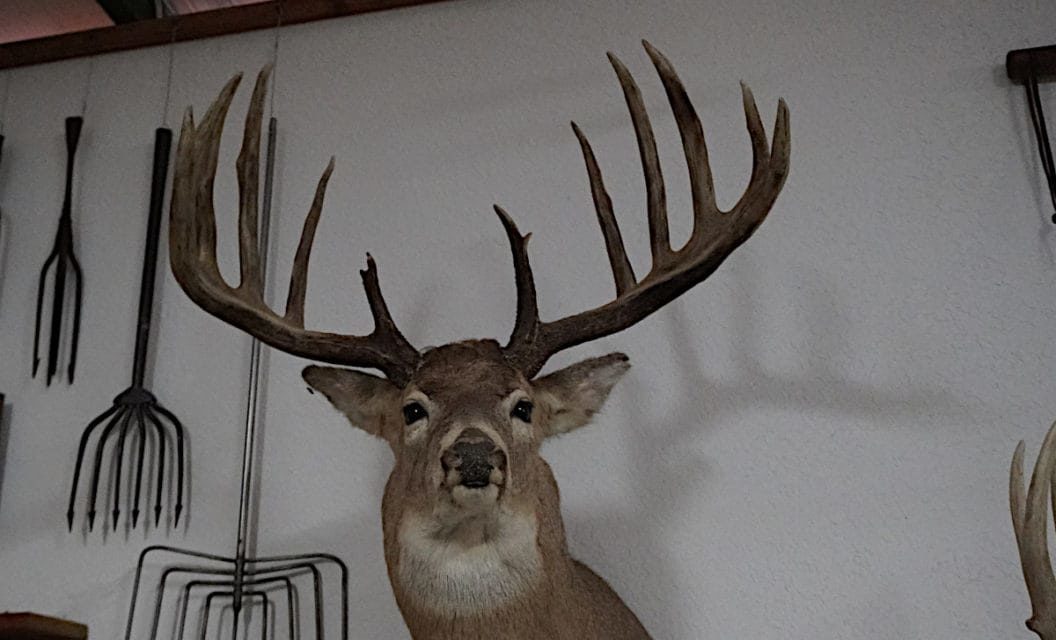 The Mel Johnson Buck: The Archery World Record That Has Stood for 50+ Years and Counting


In the deer hunting world, the typical whitetail buck records are some of the most sacred. They are the records every hunter wants to break, and because of the unpredictable nature of whitetail antlers, they are also the hardest records to break. Mostly because the big bucks at the top of the record books are of proportions that simply seem impossible to top. And when they do, the deer’s rack must be clean of enough abnormal points to stand up to the rigorous nature of both Boone and Crockett and Pope and Young’s scoring systems. As a result, the margins for error are thin, and many deer simply aren’t clean enough to top the biggest bucks at the top of the record books. Some have been sitting in the number one spot for decades now.

Take for instance the world record archery whitetail, the Mel Johnson Buck, also known to some as simply “The Beanfield Buck.” This tremendous whitetail was taken in Peoria County, Illinois back in 1965 and still sits in the top spot in Pope & Young Club’s record book to this day. Many bowhunters have tried to top Johnson’s record. Some deer hunters have even thought they finally had the deer that could do it. All have come up just short for various reasons. This is the story of this legendary whitetail and just why this typical buck has been so hard to beat for the last 50+ years.

The Story of a Legend 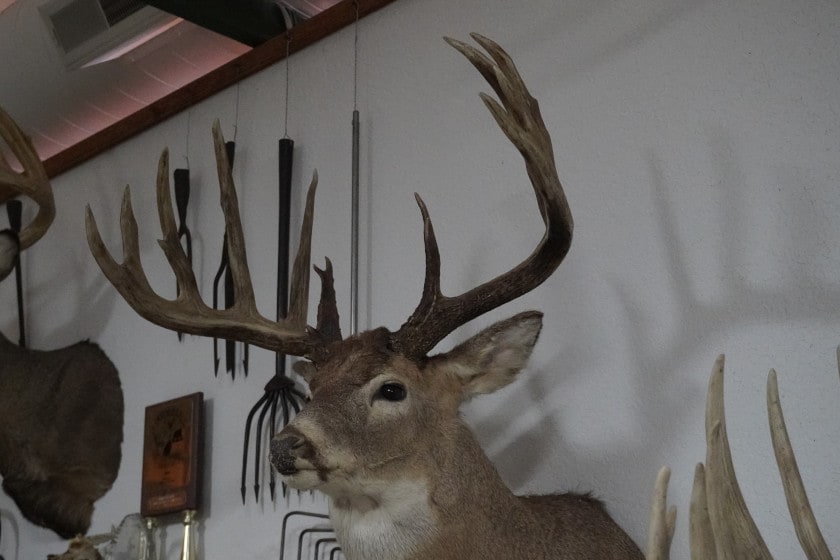 One of the more interesting facets of this world record whitetail deer is just how simply the hunt played out. Johnson did nothing fancy to harvest this buck. He simply found a good food source and waited. It just goes to show we may overthink things sometimes in modern hunting. It’s also fascinating to learn that Johnson knew he was looking at a special animal the first time he saw it. He even decided to hold off on shooting other bucks in hopes of connecting with the monster which was probably something of an oddity back in 1965 when many big game hunters didn’t care much about the size of the animal they harvested, so long as they put meat on the table.

In any case, Johnson and a hunting buddy, Bill Kallister had gotten permission to hunt this farm the year prior. The two hunters usually went out together, but Johnson was hunting alone the night he connected with the big deer on October 29, 1965. While he had several treestands in the area, they had not been working for him. So, he decided to switch things up and hunt from a quickly constructed ground blind. The hunter set his recurve bow into a makeshift holder made from a forked stick and set back to wait while watching the small soybean field in front of him.

“The sun had just barely cleared the trees and he came out of the far corner of the beanfield and proceeded to cross over to my side of the field,” Johnson said in a Legendary Whitetails interview.

The buck followed the edge of the field, which caused Johnson to lose sight of it for a while. When he finally spotted the buck again, it was only about 20-30 feet away from the hunter! Just imagine having a 200-inch buck step out that close to you! Johnson kept his cool when the buck slowed to stop in front of him, and even turned to look at him. Fortunately, the wind was good, and the deer didn’t spook. When the buck turned away again, Johnson sent a fiberglass arrow and broadhead barreling towards the deer’s vitals. The big buck turned and fled over a rise in the field beyond Johnson’s vision. He quickly made his way over the rise only to see the buck laying in the field making his last few kicks. The arrow had passed completely through the buck taking out the lungs. The huge whitetail died in the field just moments later and Johnson had his world record buck.

The buck was massive, not just in terms of antler size, but body too. The huge buck dressed out at 270 pounds! Johnson estimated the buck may have weighed 340 pounds on the hoof. That’s a big-bodied whitetail. The deer was so massive, Johnson had to get the farmer who owned the field to help him get it out of the woods that day. 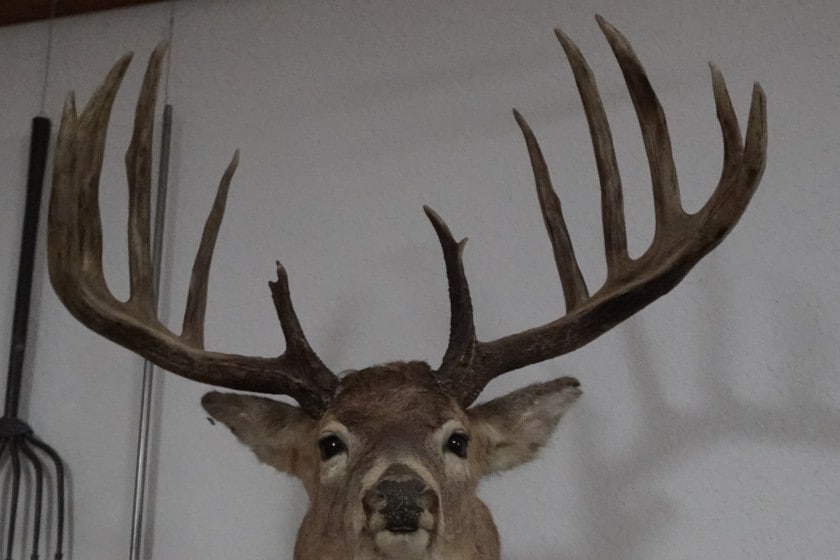 Johnson knew he had a special whitetail on his hands after the harvest and began doing research into Pope and Young and Boone and Crockett Club’s record books. However, by his own admission, he didn’t realize just how special. He eventually contacted a scorer who worked at the Field Museum in Chicago and took his buck there to be measured. By this point, Johnson had learned more about the scoring process and had come up with what he believed was an accurate score according to the rules. However, his hopes were dashed a bit when the scorer broke some bad news to him. It wasn’t as big as he thought it was.

“He came up with a score about nine or ten inches less than I did, and I was completely deflated,” Johnson said in an interview with Legendary Whitetails. “I thought, ‘Oh my, lad, what’s going on? I couldn’t have made that big of a mistake.”

Well, Johnson was correct. He had not made a mistake, the scorer did. Somehow, the official measurer had managed to miss one of the circumference measurements. The difference was huge, as it took the buck’s gross score from somewhere around 197 to closer to 207 inches. To put things in perspective, less than 15 wild whitetails have ever been confirmed with scores over 200 inches typical. Of those bucks, only about five have scored 205 or more. Johnson’s deer was special thanks to those long tines, massive inside spread, and huge mass measurements. Boone and Crockett agreed. The Johnson buck was given a panel scoring by B&C judges later who confirmed a final net score of 204 4/8 inches. This score was enough for the Johnson buck to ascend the throne as the largest typical archery whitetail ever.

Besides holding the world record for an archery kill for the last 50+ years, there is another significant thing about this buck. This deer is the only animal to ever earn the hunter who took it Pope and Young’s rarely given Ishi Award and Boone and Crockett’s equally rare Sagamore Hill Award for an outstanding trophy. Each of these awards has been handed out less than 20 times, which is saying something in the long and storied histories of both clubs.

Why Johnson’s Record May Never Be Topped 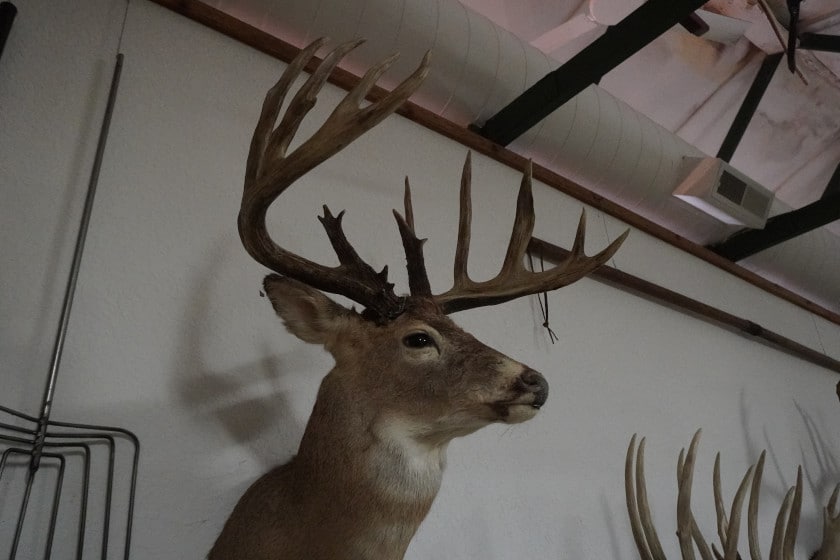 So, why has no one even been able to come close to the Johnson buck in all the years since? One would think it was only a matter of time before someone shot a bigger buck with archery gear. To be fair, a few deer have gotten close. In 2001, many people thought the Wayne Zaft buck would finally do it when it netted 206 7/8 in a green scoring session. Unfortunately, that buck had a questionable G3 that a panel scoring session ruled was non-typical, which knocked the score down into the low 170s.

Then there was the infamous “Rompola Buck” in 1998 that hasn’t been confirmed real one way or another. More recently, some thought Guner Womack’s incredible, perfectly symmetrical 8×8 Oklahoma whitetail also had a chance at the crown. However, the frame and spread were just not quite large enough and the buck’s 201 5/8-inch typical score was knocked down to 188 5/8 inches.

The rarity of a buck the size of the Johnson buck becomes even more apparent when you start factoring in any weapon. There are only a handful of bucks in the company of Johnson. Milo Hanson’s 213 5/8-inch world record, Jim Jordan’s 206 1/8-inch Wisconsin monster, and Larry Gibson’s 205-inch Missouri beast all sit in B&C’s record books ahead of Johnson. Further underscoring the rarity, very few deer sit below the Johnson buck and still score over 200 inches typical. Simply put, it’s hard to find a typical whitetail frame over 200 inches that is not harmed by some non-typical points somewhere. Going back to the Larry Gibson buck for a moment, that deer should have scored near 207 inches, but was denied a higher spot due to a damaged G2 tine. You need an area with great genetics, fantastic nutrition to maximize antler growth, and then you need to hope the buck doesn’t damage his growing antlers in velvet or bust a key tine off prior to being shot. There’s a lot of hurdles that must be cleared perfectly for this record to fall.

Even if a buck does score over 204 inches typical, taking a deer like that with archery gear is no easy feat. A buck that has reached that size is likely to be 5.5-6.5 years old and has become a master at evading bowhunters by that point. We know of a few bucks that existed who would easily break the record like the Knifehandle buck and The General, which would top even the Hanson buck in size. However, these deer are known only through sheds. Those giant typicals are just too darn smart! Even assuming one makes a mistake, it’s then up to the hunter to hold it together while a buck like that offers a shot. You think it would be easy? I can almost guarantee you it would not. Remember how much harder bowhunting is than other disciplines involving a firearm.

The truth is, most bowhunters probably have better odds of winning the Powerball than they do breaking the Johnson record. Which oddly enough, many hunters seem to be fine with. Johnson was an incredibly well-respected hunter prior to his death in 2018 at 84 years old, and he did a fine job of representing the tradition of bowhunting in that time. This is one of the few record deer you’ll hear anyone arguing about.

While at this point, we feel like it is unlikely anyone ever tops the Johnson buck, at least in our lifetimes, we must admit we will continue to watch and hold our breath hoping a worthwhile contender that also honors Johnson’s legacy will come along one day.

The post The Mel Johnson Buck: The Archery World Record That Has Stood for 50+ Years and Counting appeared first on Wide Open Spaces. 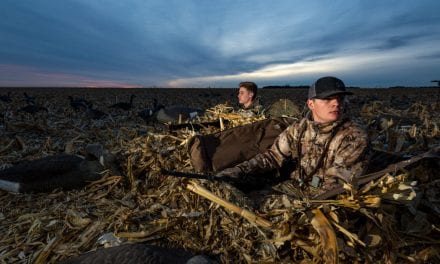 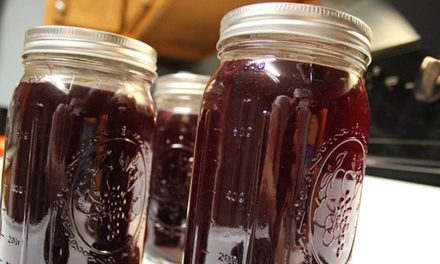 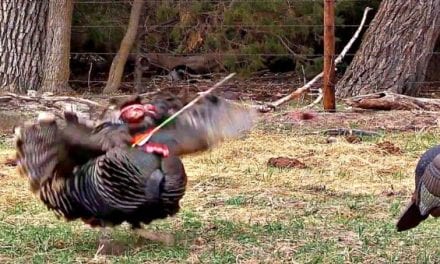 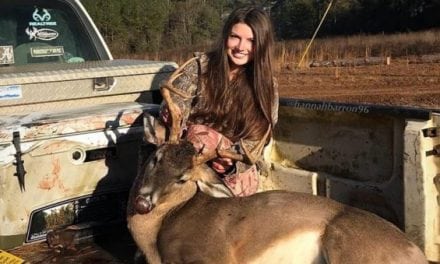 Video: Hannah Barron and Her Dad Team Up for a Late-Season Buck