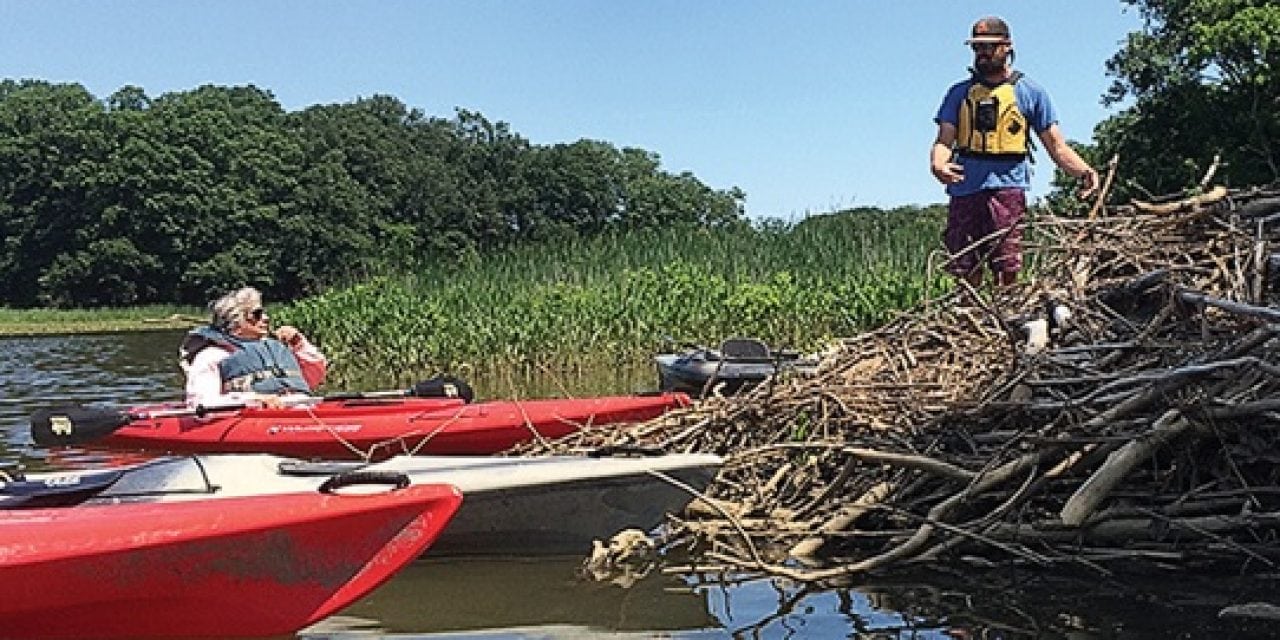 Paddling on the Sassafras River shows off the Bay that was If Capt. John Smith could come back to retrace his Chesapeake journeys in the early 1600s, he might find portions of Foreman Creek much as he saw it four centuries ago.

On this murky tributary of the Sassafras River, trees hug the shores, and lush green beds of wild rice blanket the shallows. While paddling it recently on a kayak excursion organized and guided by the Sultana Education Foundation, I saw blue herons take wing as we glided toward them. Deer drinking at the water’s edge raised their heads before retreating into the woods. Bald eagles and ospreys patrolled the mostly blue sky overhead.

“It’s like National Geographic out here, man!” exclaimed Chris Cerino, Sultana’s vice president and one of two guides for our group.

Indeed, this morning paddle delivered impressive views of a relatively untouched corner of the Upper Chesapeake Bay, enhanced by insights from our guides on the natural and colonial history of the region.

It’s all in a day’s work for the Sultana Education Foundation. The Chestertown-based nonprofit was formed nearly 20 years ago to help build a replica of a 1768 schooner of the same name for use in teaching students about the Bay. In the years since, the foundation has broadened its educational programs to offer a variety of activities and events for individuals and families as well as school groups.

From spring through fall, Sultana sponsors a series of guided public paddles on the Chester, Choptank and Sassafras rivers. Two to three hours in length, they’re an excellent way to sample the Chesapeake as it ought to be: from the water. The foundation supplies the kayaks, paddles and life vests. The groups are small — no more than 10 people, ages 12 and older, with two guides — and the itineraries are flexible and relaxed.

They’re also great for anyone with little or no paddling experience. That was a draw for me; while I’m no beginner, I hadn’t done any kayaking in more than a decade, with back troubles intervening to make me leery of strenuous paddling. The woman who answered the phone at the foundation assured me that the paddles were easy, and the guides were fully prepared to assist anyone who needed help, even towing them if need be.

This paddle launched from Mount Harmon, a former tobacco plantation with a mostly restored 18th-century manor house, various outbuildings and 200 acres of fields and forest. It’s bordered on three sides by water, on an out-of-the-way peninsula known in the 1700s as “World’s End.” It’s open to the public from May 1 through Oct. 31, Thursday through Sunday, with guided tours of the antiques-filled house. Admission to Mount Harmon ($10 for adults, $8 for seniors, $5 for children) was included in the cost of our paddle.

The paddlers hailed from near and far — Earleville, MD; Chestertown, MD; Baltimore, the District of Columbia and New York state. Cerino and John Mann, the foundation’s director of educational programs, showed us a map of the creeks we’d be paddling and made sure everyone donned a life vest. They also helped us to find a suitable kayak and paddle.

Before putting in, they used a handheld salinity meter to show that the water was nearly fresh, with just one part per thousand salt. Then Cerino used another scientific tool — a Secchi disk — to demonstrate what we could all see: that, unlike some other places around the Bay, the water here was not very clear. The black and white disk disappeared from view just 18 inches below the surface. Cerino suggested soil runoff from farmland in the watershed could be a factor, along with the influx of muddy water from the Susquehanna River, which empties into the Bay across from the Sassafras.

As we took care of the preliminaries, a belted kingfisher sounded off nearby, with a call that Cerino likened to a cicada on steroids. Our gathering at the water’s edge also disturbed another resident — a large northern water snake. More threatened than threatening, it quickly disappeared into the rocks lining the creek bank.

Shortly after setting out, we came upon an old, barnlike structure standing on the shore. It’s the “Prize House,” Cerino explained, used by the plantation owners to ready tobacco for loading onto ships. The term “prize” comes from the large wooden screw employed to compress tobacco leaves into casks for more efficient storage.

The Sassafras brims with history. John Smith and his shallop’s crew sailed up the river in 1608 on one of two voyages the English colonists made that year from Jamestown, VA, to explore the Chesapeake. They met and traded with a group of American Indians called the Tockwogh. They also held an Anglican prayer service there, which was reciprocated with a ceremony in which Smith reported that the Tockwogh “hold up their hands to the Sunne, with a most fearefull song.”

The Sassafras, Cerino explained, is “a neat little area where America had its beginning.”

We rounded the peninsula into Foreman Creek, and Cerino guided us to the shore again. There, he found something that seemed out of place in nearly freshwater: a blue crab, or rather its empty shell, sloughed off by an immature male as it grew larger.

As we proceeded in fits and starts up the creek, Cerino and Mann gave a running commentary on the flora and fauna around us, including some survival tips if we ever found ourselves on the water without anything to eat. Arrow arum, a spade-leaved wetland plant, is poisonous, they explained, but American Indians ate it safely after drying it in the sun and cooking it. Cattails, on the other hand, are ready-made for snacking, as Cerino demonstrated by uprooting some stalks, stripping away the green outer layer and taking a bite of the white, succulent interior. A few of us took him up on offers to try it ourselves. It tasted like a mild scallion.

In the middle of the creek, American lotus checkered vast areas of the water with broad, lilypad-like leaves. As summer proceeds, their stems grow rise 2–3 feet above the surface to display bright yellow flowers. Their roots and leaves also are edible, Mann said. We took him at
his word.

At another spot, we pulled up by a massive mound of twigs and branches — a beaver lodge. Mann climbed out of his kayak and picked up some freshwater clam shells, which he said are likely the debris from a feasting river otter.

Farther up the creek, we came upon a large, mesh cylinder, mostly submerged in the shallow water. A turtle trap, Cerino and Mann declared; pulling it up, they revealed a snapping turtle and painted turtle huddled at one end. A marked buoy attached to the trap indicated that it belonged to a licensed fisherman, so they returned the trap to the water without freeing its prisoners.

The group then split up as the creek branched in two. The branch a few of us explored was nearly overgrown with wild rice, leaving an increasingly narrow channel of water in which to paddle. Around a bend, open water all but disappeared, so we turned around, regrouped and set a leisurely pace back down the creek to our starting point at Mount Harmon.

The paddle wasn’t stressful for me, and at least a couple of inexperienced paddlers in our group found it thoroughly enjoyable.

“Both guides did a great job of helping people understand this beautiful system,” said Eve Bhumitra of Long Island. She’d never been in a kayak before, but decided to give it a try while visiting her sister, Judy Mellina, who lives in nearby Earleville.

“It was fun,” Bhumitra said, noting that before setting out, “I was afraid I wasn’t going to be able to do it.”

Mellina, for her part, said her only prior experience kayaking had been with another organization, and it had been rough. This one, however, she rated “very safe” and informative.

“I knew about Mount Harmon plantation,” Mellina said. “But I never knew about the creek. It was just gorgeous…
I’ll do it again.”

The foundation has six more public paddles scheduled this year, including one moonlight excursion and at least one more launch from Mount Harmon in late July to see the lotus in bloom. The cost is $30. For information, visit sultanaeducation.org and browse the Public Paddles.

For the more adventurous, Sultana also offers an extended four-day paddling excursion in September, for adults only, in the lower Delmarva Peninsula. The 10-member group stays at the Atlantic Hotel in Berlin and explores the coastal bays along Assateague Island, as well as the cypress swamps of the upper Pocomoke River. This year’s trip is already sold out, but a similar multi-day outing is planned next spring. Details should be posted soon on the foundation’s website.

Information about other sites on the Captain John Smith Chesapeake National Historic Trail can be found here.

The post Paddling on the Sassafras River shows off the Bay that was appeared first on . 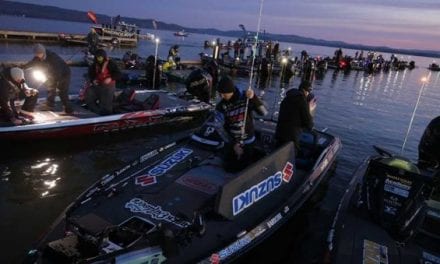 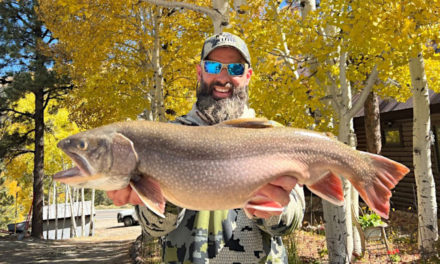 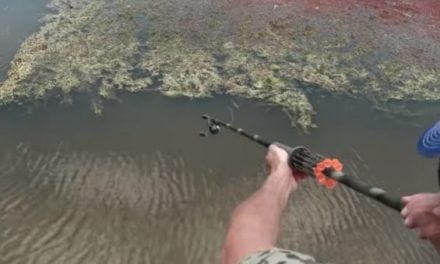 Blow Gunning River Gar is About as Good as It Gets 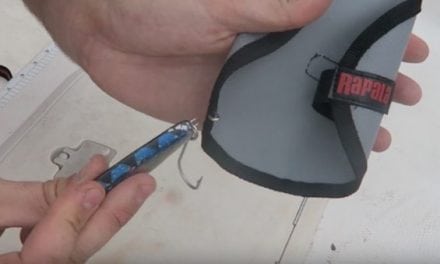 8 Fishing Gadgets Put to the Test by CrazyRussianHacker