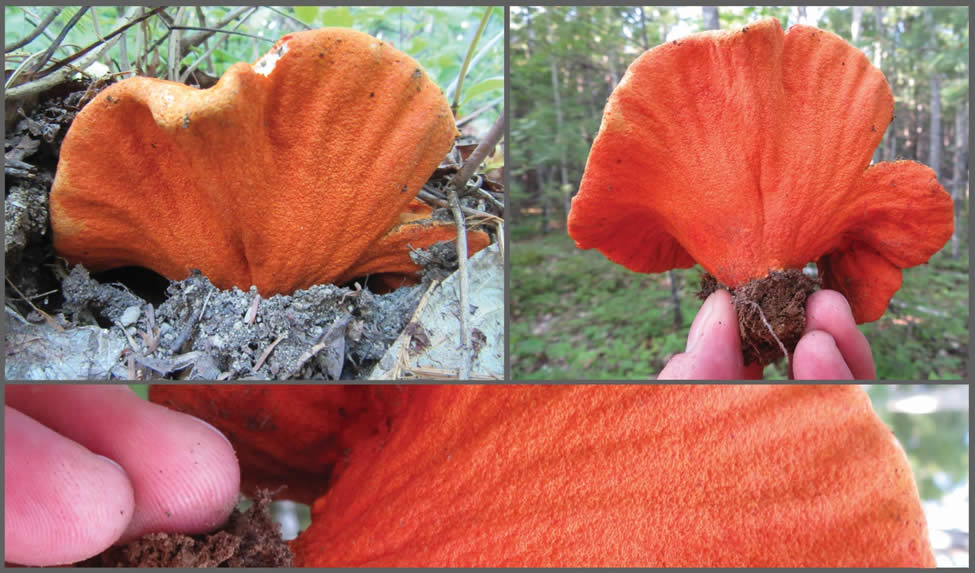 Lobster, from the Forests of Maine??

Emily’s Maine Idea, an introduction by Ryan Bouchard
This summer Emily and I spent some days in Maine, in a cabin by a beautiful lake and on the first afternoon we found some Golden Chanterelles. First, we found some little young ones that we didn’t bother picking, then we found a few really nice ones. There weren’t too many, but enough for a snack. While sautéing the chanterelles on the stove, Emily, who is very creative, splashed them with a little Pumpkin Blend Unfiltered Craft Cider by Downeast Brewery. It was a unique and inspired pairing and made for some delicious hors d’oeuvres. We ate them just before we cooked hot dogs on sticks over the campfire, with the wild cries of loons sounding out over the lake. This one is Em’s story about the next day, by that cabin, what we found, and what she made with it.

Where else but Maine would you expect to find the Lobster Mushroom? That’s not the only State where we’ve found it, but this summer, that’s where we found some real nice ones. It’s a beautiful orange species, and a bizarre one. The Lobster is actually a moldy mushroom! There are different species of mold called Hypomyces that can grow on certain kinds of mushrooms, turning them soft and fuzzy. In general, the white Hypomyces molds are themselves mildly poisonous, and they sometimes ruin mushrooms that would have been great edibles. But there is one mold species called Hypomyces lactifluorum that causes a very different, very distinctive effect. What it attacks, and feeds on, are certain mushrooms from genus Lactarius and Russula. But when it takes over its host mushroom, it doesn’t even look like a mold at all. It completely covers the mushroom in a bright orange crust. And this crust is full of little orange spore-capsules, forming a rough texture on the mushroom’s surface. Under this crunchy coating, the gills of the host mushroom are obliterated, and the mold alters all the flesh inside, too. Now it’s lobsterized! Ryan says the Lobster is “the bleu cheese of mushrooms,”a gourmet food item that’s loaded with a great edible mold. 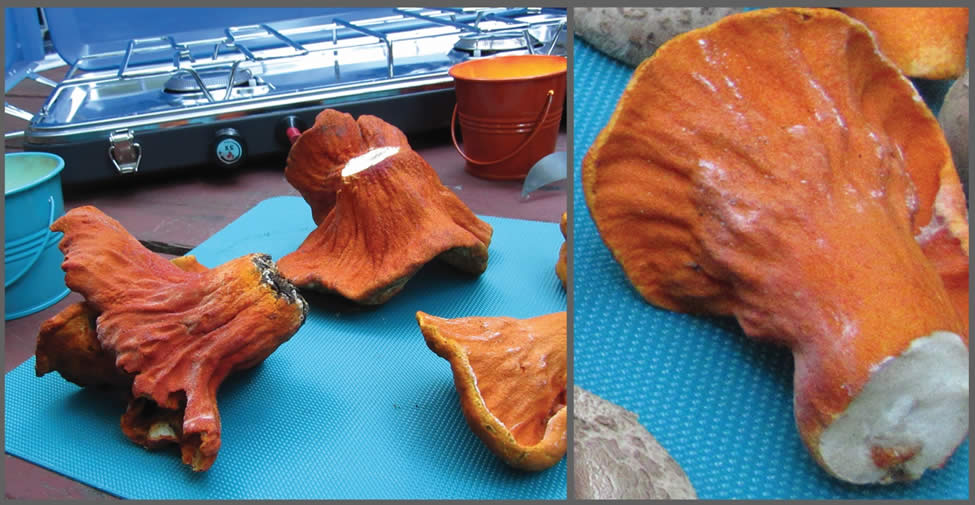 Some foragers are proud to tell you they use only foraged ingredients, but I’d rather enjoy the freedom of mixing my fresh wild mushrooms with whatever I want. Even if it’s generic hot dog buns, left over from last night’s campfire. In fact those gave me an idea. “This is perfect. I’ll make Lobster Rolls, even though it’s Lobster of the Woods.” Some people insist on believing that this mushroom species tastes like lobster, but the truth is, the Lobster Mushroom has a mild nutty flavor—not even a hint of seafood! It is a unique experience though. Sometimes when you bite into it, you can feel the tiny spore capsules bursting, sort of like caviar—but still, no seafood flavor. It got its name because it looks like lobster when chopped up: pale meat, inside an orange skin. It also has a great texture, somehow soft and firm at the same time. So, by frying it in enough butter, you’ll at least serve something that might bring lobster to mind.

What’s the main complaint about actual lobster rolls? “Not enough lobster!” of course. But we had collected a whole nice set of these mushrooms, and some were pretty heavy too, so that wasn’t going to be a problem. So I decided…a lobster roll. Well, make that a “Land Lobster roll.” It was a fun idea, and I had to see how it would come out.

I brushed them clean, sliced and chopped them, and thoroughly sautéed them in butter.  Then I chilled them in our cooler.  Once they were cold, I mixed them with mayonnaise, and then filled the buns with this “Land Lobster Salad”.  I squeezed a little lemon juice over it.  For a little extra zing of citrus, I sprinkled some wild Wood Sorrel leaves over the top.  You can see them in the final photo, which shows the completed recipe.  Delicious, different and delicious.  As you learn more about mushroom hunting and gradually try new species, keep an open mind.  Maybe you’ll find yourself inventing your own wild mushroom recipes. 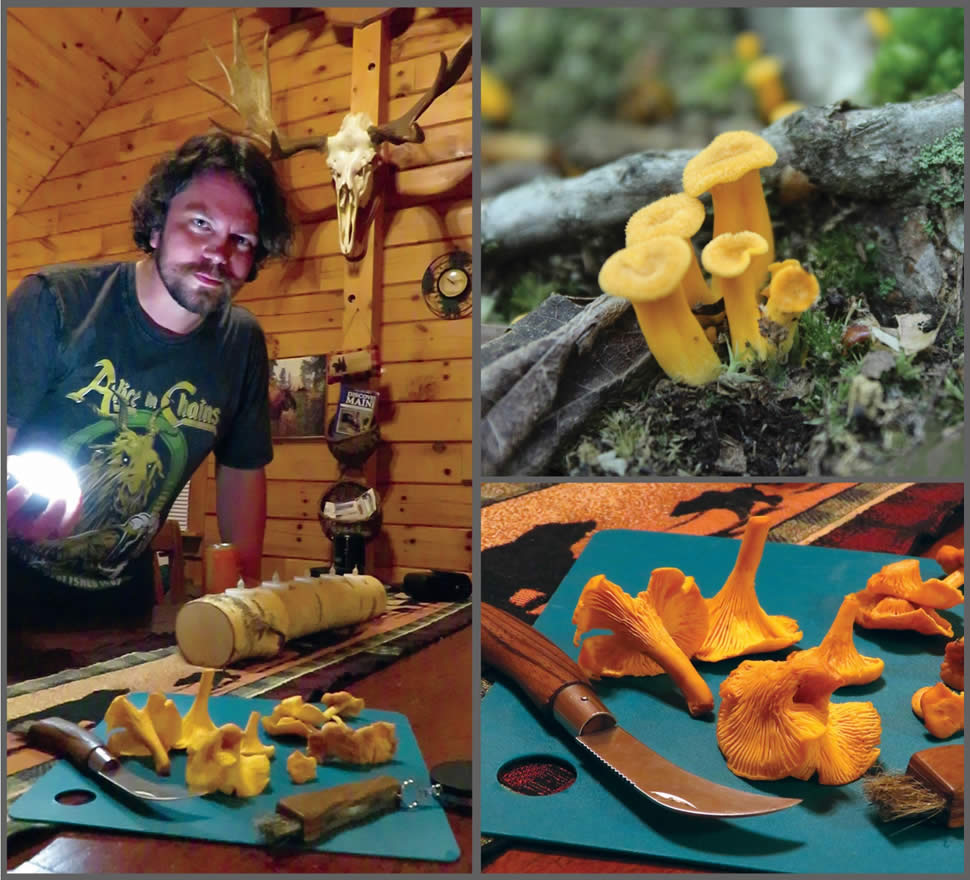 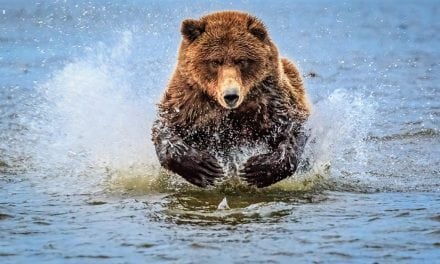 Photo Of The Day By Lew Abulafia 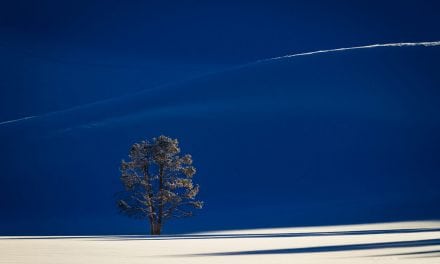 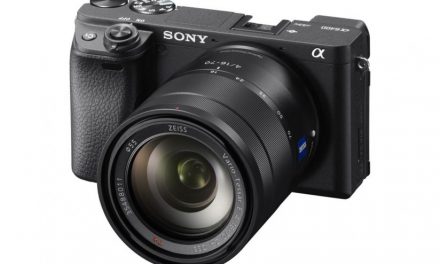 Sony a6400 Can Now Do Real-Time Eye AF For Animals 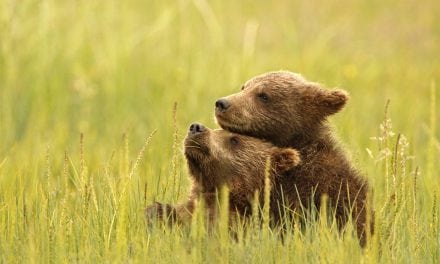 Photo Of The Day By Heather Genovese