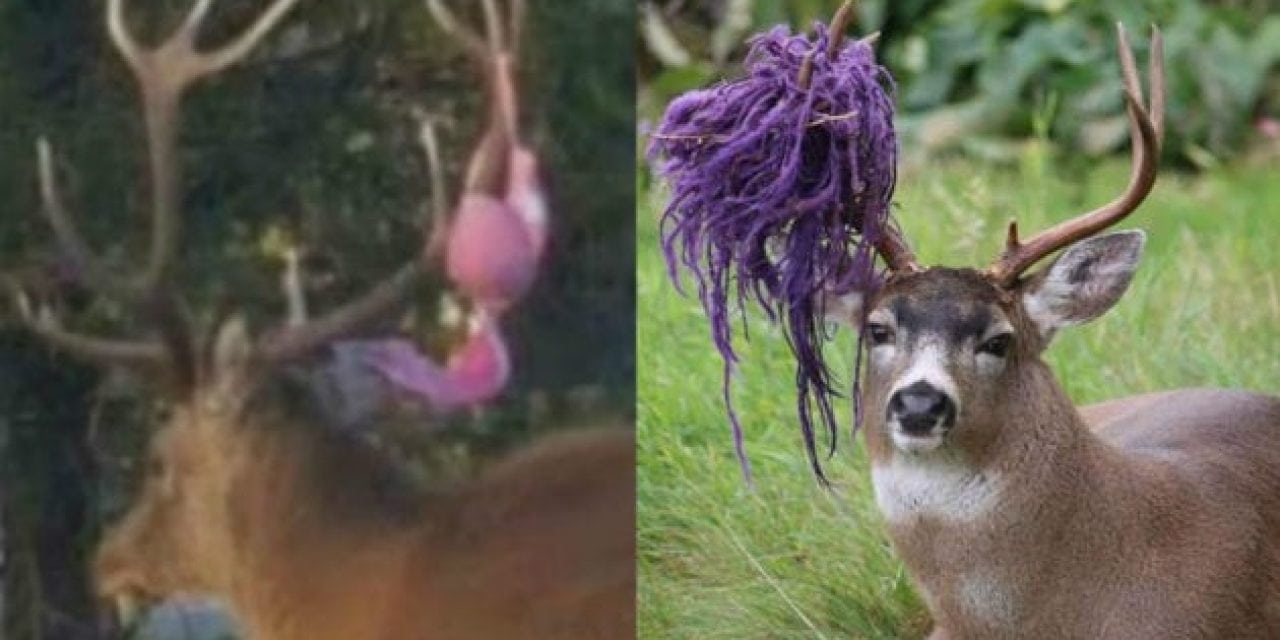 12 of the Weirdest Things Deer, Elk and Moose Have Gotten Caught in Their Antlers

How did these animals get tangled in these weird things?

One of the reasons we love deer, elk and moose is because of their awesome antlers. When the rut comes around, testosterone levels rise and many of these animals take out their frustrations on human-made objects.

And sometimes, they become hopelessly entangled in these objects. Sometimes it requires human intervention.

But what are some of the weirdest things members of the deer family have gotten tangled in their antlers? Well, we put together this list of 12 of them to show you. Some of them you have to see to believe.

This one was documented in Kelowana, British Columbia, Canada in 2016. An urban mule deer managed to get hopelessly tangled in someone’s backyard volleyball net. It was bad enough that the net was almost obstructing the deer’s vision.

Enter the British Columbia Conservation Service. They tranquilized the buck and cut the net free. The buck wandered off none the worse for wear, although humans in the area did get some humorous photos of the buck’s predicament.

Moose antlers are huge, and if a bull isn’t careful, they can get caught on almost anything. Surely you’ve seen the Farmer’s Insurance commercial where the moose destroys a car after getting a swing set caught in its antlers. They aren’t lying when they said it really happened. This bull’s huge antler size got him caught in a swing set in Weber County, Utah, in 2014.

There really wasn’t much more authorities could do other than wait for this bull to tire himself out. Once he did, they were able to move in and make the rescue with a well-placed cut. Interestingly, unlike many of the incidents on this list, this tangled-up moose happened while the bull still appears to be in velvet and antler development wasn’t quite done for the summer.

Usually, this type of aggressive behavior only happens when testosterone levels rise during the rut. We guess moose just like picking fights with inanimate objects.

Brady Hempen knew there was something strange about the big buck he shot during the 2016 Tennessee deer hunting season. At first he thought it was carrying around the head and antlers of another buck.

It sounds plausible to us, mainly because we can’t figure out how this could have happened otherwise. Other than the parachute, the buck was in good condition and still had some velvet antler under the tattered parachute. Hempen had the buck mounted with everything still attached. Sounds like an awesome mount to put on the wall, doesn’t it?

If you use a hammock to relax in the summer, you might want to take it in before the fall comes. Last October, the Kansas game wardens had to respond to a call of a young male deer that picked a fight with one. Not surprisingly, he lost that fight.

Enter in the Kansas game wardens. One brave warden used his knife to cut the young buck free. But he also destroyed the hammock in the process. No more summer relaxation for that hammock’s owner.

But, this wasn’t the only deer to get tangled in a hammock in 2017. Another buck, this one a mule deer, got tangled in a purple hammock in British Columbia, Canada. The buck quickly earned the nickname “Hammy,” and became a local celebrity with his own Facebook fan page and even a T-shirt.

This trail camera photo has made the rounds on deer hunting websites for years now. This is a photo where we have no idea when or where it was taken, but it sure is wild-looking. We’re also quite puzzled by it.

The bucket is sealed and upside-down in the buck’s rack, which is just the right antler size to hold this thing. Because of the position of the bucket, we don’t think he was trying to eat something out of it. So just how did it get caught in his hard antlers? The world may never know.

This one went wildly viral last April. This big red deer stag was spotted in Applecross, Scotland, with a rather strange souvenir dangling from his antlers. Fortunately someone got a photo, because no one would have believed it otherwise. It was a woman’s bra!

It’s believed the stag wandered into a clothesline at some point and that’s how he got the unique decoration. Still, the rut jokes for this one write themselves, don’t they? We just wish we could have been there to see a deer hunter take this stag or see someone find that deer shed later on. That would make for a great conversation piece, wouldn’t it?

This one has happened several times all over North America. It probably shouldn’t be surprising. Soccer fields are nice, open, groomed areas that are a perfect place for deer to graze. But hard antlers and netting don’t mix. Whenever it happens, authorities have to be called out and for impromptu rescue missions.

This one happened in December 2015 and was obviously the source of many a wayward reindeer joke. The big buck also gets his hoof tangled in the lights and the situation could have possibly become a deadly one for this mule deer. Thankfully, some food to calm the deer and some patience from the humans in the situation results in the buck being eventually cut free from his predicament.

This one happened in Pine, Arizona, in 2016. Some of the animals on this list became more tangled than others. This bull is definitely an example of that. He got into a real mess when he got tangled up with a tire swing. But it was this elk’s lucky day. He wandered into a veterinarian’s back yard!

“I was constantly watching the antlers while I was trying to make the cuts,” she told a local news station.

We can’t blame her. But we’re glad this story had a happy ending.

This puts a whole new meaning on the term “basket rack.” This young buck was photographed with a small basketball caught in his antlers in Bethel Park, Pennsylvania, in 2013. We’ve seen deer pick a fight with some strange things, but a basketball is definitely near the top of that list.

This is one of our favorites on the list, simply because the buck is hilarious-looking and the odd decoration doesn’t look like it was harmful to the deer in any way.

This is another one that’s been circulating deer hunting social media channels on the internet for years now. I doubt anyone knows when and where it was originally taken at this point. If you do, please email me!

But considering how aggressive older bucks can get during the rut, it’s not too surprising. Whitetail deer antlers are very tough, so we’re sure it’s possible for a buck to skewer a target like this.

What is surprising is the fact this big buck was able to lift the target/decoy up over his head. That couldn’t have been easy. If this big buck survived the season, that would be one interesting set of deer sheds, wouldn’t it? We really wish we knew more about this photo and if the buck ever met up with a deer hunter. Put a blue tarp on a set of elk antlers and you get something that looks vaguely like a blue sail. That was the case with this young bull in Oregon last year. The bull managed to free itself later on, but not before it was seen by many local residents.

The most surprising thing about this one was the fact this happened in April and tarp didn’t cause two shed antlers as the bull struggled to get free.

NEXT: WATCH THIS YOUNG BULL ELK’S BATTLE WITH A BLUE TARP

The post 12 of the Weirdest Things Deer, Elk and Moose Have Gotten Caught in Their Antlers appeared first on Wide Open Spaces. 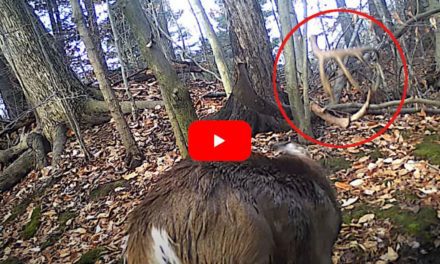 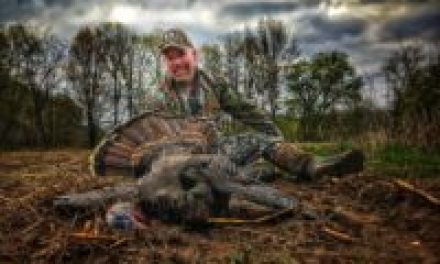 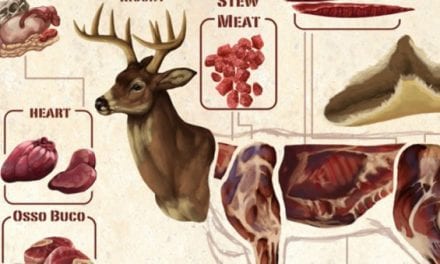 Deer Meat Butchering Diagram: Do You Know All Your Deer Parts? 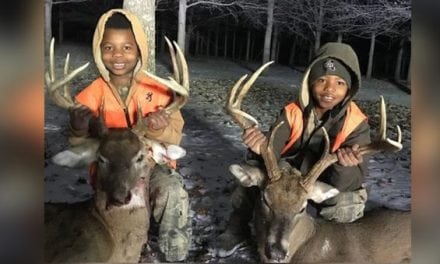